This month’s column highlights the San Diego chapter, which is also where IPC Apex Expo 2019 will be held at the end of January.

You will also find updates on recent CID and CID+ certification success stories, a recap of the PCB Carolina event from the Research Triangle Park (RTP) North Carolina chapter, and upcoming events, so mark your calendars for next year!

The IPC Designers Council is an international network of designers. Its mission is to promote printed circuit board design as a profession and to encourage, facilitate, and promote the exchange of information and integration of new design concepts through communications, seminars, workshops, and professional certification through a network of local chapters.

A main goal of our chapter is to bring the PCB design and engineering community together by holding local chapter meetings where industry leaders speak about various topics—such as design and manufacturing trends, capabilities, new technologies, and improving data exchange and communication—in an effort to engage and educate the community as well as take part in networking. Our largest annual meeting with the highest attendance—up to 75+ people—is held at the Del Mar Electronics and Manufacturing Show, which takes place in San Diego at the beginning of May. This show typically runs for two hours and has one or multiple speakers in addition to thousands of dollars in raffle prizes given away.

The four to five other meetings throughout the year are hosted at various venues, and typically have approximately 25-40 people in attendance. There is usually a $10 donation at the door to help contribute towards food, refreshments, and raffle prizes. The meetings are held as luncheons or can be later in the evening.

Some of the various topics that the chapter has covered include:

Our next meeting will be held in mid-January of 2019 where officer elections will occur. Our longtime chapter chairman, Bob Griffith, is being promoted to the IPC Executive Board, so a replacement will be voted in.

Bob has rigorously contributed to the San Diego chapter for over a decade, providing not only his time and expertise but also his personal funds when needed for the chapter to continue to grow and thrive. His hard work and dedication have allowed the San Diego chapter to evolve and stay alive over the years, and he will be greatly missed from the group. It is with much gratitude that the IPC San Diego chapter bids Bob Griffith farewell and the best of luck with his new IPC ventures.

Bob has nominated the following people to take over these particular roles as he makes his transition, which will be voted on publicly with San Diego chapter members to make it official:

The chapter would like to encourage any PCB professionals in the San Diego area to become a member of the group. Membership is easy, and best of all, it’s free! Join us in January and take part in the officer election to help shape the outcome of the future for the chapter. If anyone else is interested in pursuing any of the above-mentioned roles, this is an open election, and all interested parties will be considered. If you’re interested in learning more about the chapter, becoming a member, or pursuing a board position, please contact Luke Hausherr.

There were several recent IPC CID and CID+ classes throughout the months of October and November. Kelly Dack, Mike Creeden, and Gary Ferrari were the trainers for those classes and reported that their classes continued to have positive synergy with great results. Mike specifically commented that his CID class held in Dallas, Texas, had 18 students attend all from Lockheed Martin. His other CID class held in Orlando, Florida, had 23 students participate from Lockheed Martin as well. Kudos to Lockheed Martin’s upper management for recognizing the value of professional development of their staff. These two classes respectively involved more company focused and site-specific classes.

Meanwhile, the fall IPC standards meeting and PCB Carolina 2018 event, which always has IPC CID and CID+ certification classes, are more regional classes with students typically attending from all over the Midwest. The two most recent regional IPC CID and CID+ classes were held in Anaheim, California, and the trainers were Paul Fleming and Stephen Chavez. 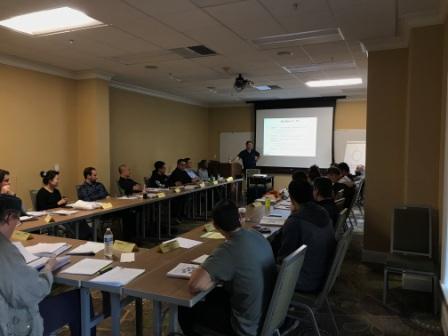 Paul stated, “We had a great CID certification course in Anaheim earlier this month. It was a full class made up of students from all over the U.S. who brought with them a great variety of backgrounds and experience. Every class creates a unique experience for both the students and me. I’m always excited to see a new group of CIDs ready to step more fully into their role as a key part of the product design cycle. I’m proud to congratulate this new group of CIDs.” As for the CID+ class, it too was another success with students attending from all over the Southwest region of the U.S. and Mexico. It was one of the most collaborative advanced classes I have been involved in with lots of student engagement, which directly relates to the overall success of the class. What stood out the most to me in this particular class was the fact that all the students continued studying together after hours not only to achieve individual CID+ certification success but for building relationships for future industry knowledge sharing and professional networking. 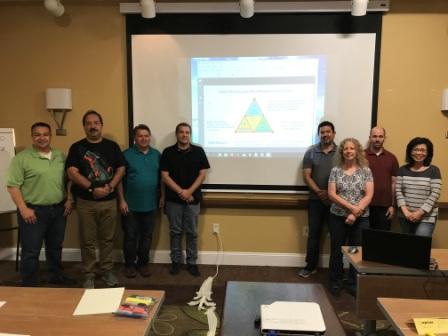 The RTP chapter’s goals include bringing the PCB design community together by holding quarterly meetings, sharing ideas over meals, discussing chapter business, reviewing the current health of the job market, and fostering continuing education by holding technical presentations by guest speakers. We also created a local trade show, PCB Carolina, to offer our design community an opportunity to attend a trade show and technical presentations at no cost to them.

PCB Carolina 2018 was held on November 7 and was a huge success again this year. This premier electronics trade show offers free access for all attendees to the showroom floor, keynote address, all technical sessions, food and drinks, and door prizes. Vendors pay for the privilege of a table and can purchase other promotional perks (ad hoc) or via a sponsorship. This event revenue is by far the major contributor to the chapter’s annual budget. This year’s event was held at North Carolina State University’s McKimmon Center for Continuing Education and offered the following: 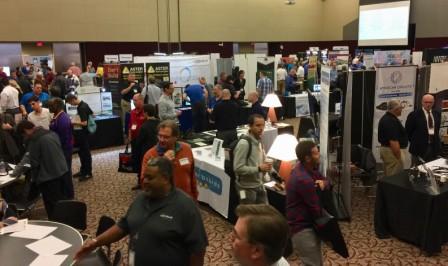 Our chapter maintains open communications with area engineering and technical schools, including North Carolina (NC) State University, Wake Technical Community College, and Coastal Carolina Community College. Since we hold PCB Carolina at NC State, we occasionally invite their professors to speak at the trade show. We often get volunteer support from local community colleges for the trade show to help set up, fulfill duties during the event, and some stay to help tear down. Getting the local community colleges involved gives them access to the experience of the show, industry vendors, job scouting, technical training, and the ability to network with people they might never have access to meet. They love the experience, and we keep getting volunteers year after year. The local community is fortunate to have access to such a fulfilling trade show with a wide selection of training opportunities. The local trade show would not be possible without endless hours donated by the RTP chapter of the IPC Designers Council. Our chapter has 200+ members on email distribution, and meetings can have up to 40 attendees depending on the time of year and topic being discussed.

In addition to our recent chapter activity with PCB Carolina 2018, we’ve started planning for 2019:

• Occurred after certification classes on December 7 at the same location

• The Altium user group met immediately after the meeting

Note: Dates and locations are subject to change. Contact EPTAC Corporation to check current dates and availability. A minimum enrollment of seven students is required for a class to be held.