And do you truly know the source of the material?

Occasionally my column topics are tied to discussions that flow through my email inbox. I had one such inquiry last month from a super-savvy signal-integrity consultant that I believe is of interest to a wider audience.

I was reading your DesignCon paper on fiber-weave effect. There was a table showing 1067 spread weave and non-spread weave … It was my understanding that they start with 106 to make 1067. I thought 1067 was 106 weave that was spread, and the 7 at the end distinguished it from 106. It has been my experience that 1067 is mechanically spread glass for different laminate suppliers. Some may spread in warp and weft, while others may speed in one direction only. If you say there are two versions of 1067, how do we avoid confusion?

This is a deep subject, so I’m just going to touch the surface in this column. Later will come several articles on the overall topic addressing 1) why do we care (hint: glass-weave skew), and 2) distinctions and nuances in glass styles.

Why do we care? 106 glass has quite a history as a low-priced, dual-ply alternative adjacent to power planes, in part as a means of managing dielectric-breakdown risks (e.g., electrochemical migration, arcing, etc.)  At higher speeds, where glass-weave skew (GWS) is a concern, dual-ply 1067 is in vogue. (More on this next month.)  Both tend to be used when engineers and fabricators are targeting dual-ply dielectric thicknesses in the 3.5 to 5 mil range.

In my response, I mentioned to be careful about making assumptions regarding the numbering system associated with glass styles. I’ve looked hard for a pattern, using English and metric parameters for the 80-some glass styles, sitting on IPC glass-fabric meetings, and asking people who should know. No luck so far. If there’s a pattern, I haven’t found it, and I haven’t met anyone else who has either. I’m of the view that the numbering system isn’t a system at all. Not to say there’s no relationship here or there, but there isn’t an overarching system to hang your hat on. Please ping me if you know otherwise. (No theories, please. I’ve heard them already.)

That said, there are definite similarities between 106 and 1067, along with notable differences. None of the similarities or differences has anything to do with whether the glass is “spread,” however. (We’ll pick this up in detail in a later installment.)

Industry standards. We need to start with concrete definitions and specifications the industry has already agreed on. Definitions of the differences between 106 and 1067 are summarized in TABLE 1 from IPC-4412B, Finished Fabric Woven from “E” Glass for Printed Boards.

A 1065 glass is included in Table 1 because it has similar fabric counts to 106, but a different thickness. On the other hand, 1067 has a similar thickness, but higher fabric counts. The higher glass weight for 1067 results in proportionately higher costs as well, and being that it’s a somewhat newer construction alternative, lead times and availability need to be considered.

So, the fabric counts are different. Strand diameters are different. And, by extension, the weight per unit area is different, according to IPC-4412B, and without consulting individual laminate manufacturers. Look for a pattern in Table 1 and email if you find one. I can often predict what’s going to happen in Game of Thrones, but I’m not seeing the pattern here. To keep this discussion simple and focused, we’ve addressed a significant set of differences between these two glass styles, and we’ve hopefully dispelled the myth the main difference is whether the glass is “spread” or not. (That’s a separate, more-detailed discussion not currently addressed by IPC.)

Terminology: Spread, mechanically spread, or flat? IPC, rather than individual laminate manufacturers, decides what 106 vs. 1067 is. But IPC has not agreed on a definition for mechanically spreading glass. Isola has one definition; Nanya has another, and Nittobo or Asahi may have their own.

Like many aspects of the copper-clad laminate (CCL) world, a laminate’s “degree of spread” is left to the glass manufacturers, who seem hell-bent on keeping everything as proprietary as possible. In the past five years, I attended three different IPC-4412B meetings and have tried to stay abreast of the discussions. I’m aware of four main players, including Nanya, Nittobo, Asahi Glass (not to be confused with a glass of Asahi beer), and Taiwan Glass. One or two of these vendors typically show up at IPC meetings, and if you offer to exchange business cards, you can see how a guy in a suit looks at someone he thinks might be a corporate spy.

CCL manufacturers’ variations. It gets more complicated when CCL manufacturers get glass from different sources, as many do. No one is tracking where the glass came from, and while there are IPC definitions for thickness, yarn count and weight, there isn’t control for
the spread.

Isola, for example, may always make 1067 as “spread” glass (its definition), while it always makes 106 using “normal” glass. But that does not change the fundamental definition of what 1067 and 106 glass is, and IPC-4412B is the current arbiter for the respective definitions. FIGURE 1 shows nominal dimensions provided by two laminate manufacturers. It’s worth noting fiber heights are similar between 106 and 1067 glass, which may be part of the confusion. The table also shows Nanya’s glass, used by many Asian CCL manufacturers, has relatively wider nominal widths of the fibers – including the fiber used for 106 glass – due to mechanically spreading processes. 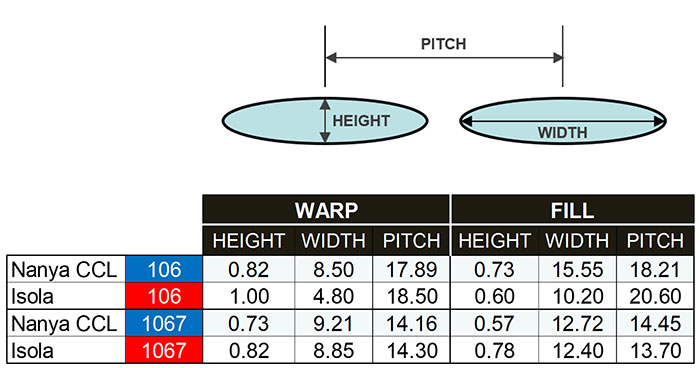 Wrapping up. I could discuss the pitch values above, both in the warp direction and for the weft, but I’m already way over my word limit. It became clear to me while writing this that I’ve opened a bit of a Pandora’s box, so this topic will be expanded on in the next few months, beginning with glass-weave skew in July, with significantly more detail on spread glass in August.

Bill Hargin has more than 20 years’ experience in PCB design software and materials. He is director of everything at Z-zero (z-zero.com); This email address is being protected from spambots. You need JavaScript enabled to view it..