Will ASICs and memory be packaged side-by-side?

Automotive. There were 1,100 exhibitors in the automotive section alone. Autonomous driving was the focus of many presentations and discussion topics, and this seems less of a distant prospect than in the past. The combination of hardware and software will make this possible, but there are still challenges. Highway driving is becoming a reality, but artificial intelligence or machine learning will have to tackle the more difficult issue of pedestrians and more obstacles in urban areas. Toyota Motor described one of its new vehicles with radar, a front camera, and 3D lidar. Honda R&D explained how it is applying lessons from its robot developments to autonomous driving. Intel discussed the complexity of automated vehicles in urban areas and the acceleration of autonomous vehicle development with the adaptation of deep learning. Bosch described its vision of the vehicle computer. Continental described issues with “over the air software updates” and data processing. Renesas Electronics discussed challenges connecting to the cloud and the importance of minimizing latency. Cyber security was also a hot topic, with presentations addressing the challenges from Honda R&D, Denso and Infineon.

Security was a hot topic in many presentations. A Japan Automotive Software Platform and Architecture (JASPAR) presentation described the organization’s activities to develop standards and common use of electronic control system and in-vehicle networks to improve development and security of next-generation systems. Continental also addressed in-vehicle ethernet standardization. 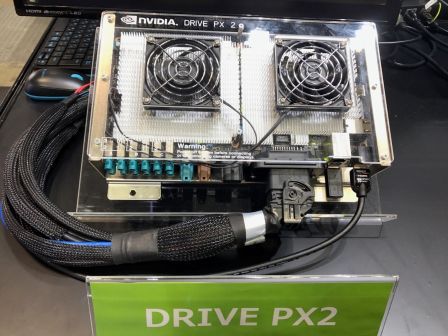 Mediatek, Nvidia, Renesas and others focused on packages for automotive products. Nvidia’s Drive PX was on display (FIGURE 1). Bosch described electric vehicles, connected cars, and vehicle computer performance, highlighting changes in architecture, security requirements, and the importance of thermal dissipation. Rohm Semiconductor discussed developments in packaging for SiC power devices. Infineon described its understanding of chip, package and boards as an interdependent system. Infineon highlighted the importance of reliability with the claim that it provides cost-effective and robust products, “which we never get back.”

Robots and drones. Different types of robots and many drones were on display. Skyrobot, a Japanese drone school, displayed a range of drones from small to large, and advertised its instruction program (FIGURES 2 and 3). 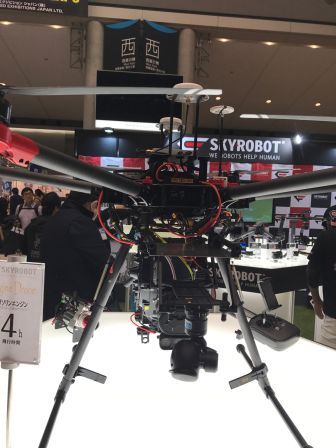 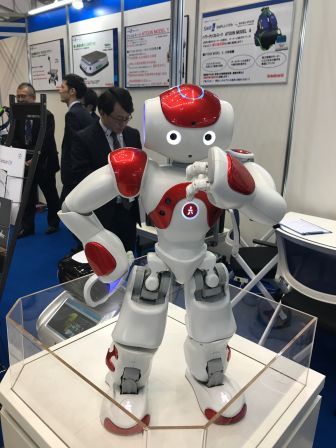 FIGURE 3. … and Skyrobot robot, one of many at the show.

It is possible to create a virtual business model covering all aspects from supply chain to manufacturing to customer satisfaction, creating a virtual business model or cyber physical model. Sensor data must be compatible with existing data protocols like PROFI Net (Europe), Modbus, ethernet/IP, Ether CAT (most popular), Sercos, and PROFI Bus. These models can also have a 3D element to model the physical factory. Presenters discussed the need for data systems to be compatible worldwide, requiring universal standards for hardware and software interoperability. The development of virtual business models and systems will require groups of companies to work together to succeed.

Fanuc described development of a mobile phone-based machine learning system for robots. Fanuc’s smart robots incorporate visual sensors into robots, as well as pressure, power and vibration sensors. With some human assistance, inspection time decreased to 2 hr. from 8. Once learning is completed, robots can learn from each other incrementally.

Bosch presented how Industry 4.0 integration permits greater product customization. Bosch presented the possibility that the customer could select the features of their car with an “order on demand” concept to provide more of a custom vehicle – a radical departure from the Henry Ford concept of car manufacturing where the customer “could have any color car as long as it was black.”

Bosch also described use of RFID tracking to increase inventory monitoring across its 11 manufacturing plants with 5,000 connected machines. Coupled with improved employee instruction via an electronic system, Bosch reported an 11% increase in productivity.

The Industrial Internet Consortium with 270 members (including AT&T, IBM, Cisco, Intel and General Electronics), and locations in 38 countries, focused on use of industrial test beds to demonstrate feasibility for smart applications prior to scale-up and provide fast feedback loops. The consortium was formed to develop and adopt widespread use of interconnected machines/devices and intelligent analytics. Goals include developing low-cost connectivity projects with high-level security and high ROI.

JTEKT, a machine tool and control tool manufacturer, described its services for add-on connectivity using standard connectors to make existing equipment smart. Its “Edge” software allows process control locally and remotely with cloud computing. When the cloud is not available, critical data are uploaded at a later time from local controllers.

As visitors crowded into its booth, Enssel, based in Korea, described its smart factory integration systems that have been adopted by Samsung Electronics Semiconductor and Samsung Display (FIGURE 4). 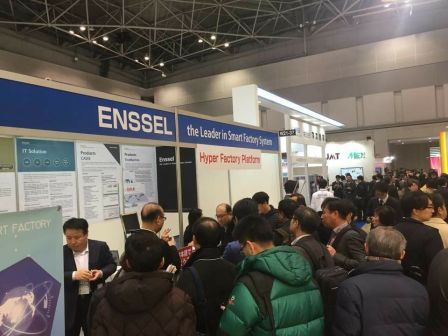 Packaging trends. Fan-out wafer-level package (FO-WLP) presentations drew large crowds again this year. Several presentations focused on developments in high-performance computing. ASE explained the optimum use of flip-chip CSP, fan-out on substrate, and silicon interposers. A lecture from SemiConsult provided a comparison of the teardown of the iPhone 8 Plus and the iPhone X. A spellbound audience listened as TSMC described the future of mobile application processor packaging, with the possibility of a move to the application processor and memory in a side-by-side configuration. The large InFO on substrate process and silicon interposer chip-on-wafer-on-substrate assembly was also described.

While the halls were crowded with visitors from Asia and Europe, there was a noticeable absence of visitors from North America. Next year’s show will be Jan. 16 to 18, 2019, in Tokyo and is definitely worth the trip. For those who can’t wait that long, Automotive World is scheduled for Sept. 5 to 7 in Nagoya.

E. Jan Vardaman is president of TechSearch International (techsearchinc.com); This email address is being protected from spambots. You need JavaScript enabled to view it..