The largest bare board fabricator isn’t necessarily the one that sells the most circuit boards.

The author begins this report with the same comments every year: It is becoming more challenging to compile the NTI-100 list of the world’s largest printed circuit board fabricators. And the 2015 edition was the toughest yet, thanks to the volatile exchange rates and increasing value of the assembly portion.

Versus the US dollar, the average value of the Japanese yen fell 14.35% year-over-year, and the Euro fell 19.65%. Given the Brexit situation, the world economic outlook is uncertain, and currency values against the US dollar are rising and falling as this report is written. After hitting a low of 123 against the US dollar, the yen began to climb and was 102 yen/USD as of this writing, or a 20% appreciation in a very short time. Three years of “Abenomics” effort was washed away in four hours after the UK’s decision to leave the EU. The fiscal years of most Japanese companies end on Mar. 31; determining which exchange rate (TABLE 1) to use for converting Japanese output in local currency to US dollars gives the author a headache. 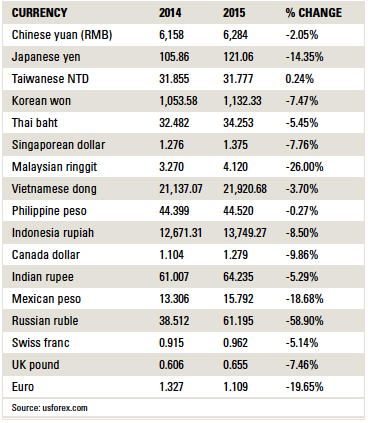 About 60% of Taiwanese fabricators’ output is made in China. Its value in RMB (yuan) is converted to NT dollars, and then added to their domestic (Taiwan) revenues. Because Taiwan fabricators calculate their output every month in both Taiwan and China, applying an “average yearly exchange rate” creates discrepancies. The author converts this “total” NT dollar-based revenue to US dollars. This creates a double discrepancy. The same occurs for all fabricators with production plants overseas.

Flexible printed circuit (FPC) fabricators are problematic, particularly those that cater to Apple, which requires FPCs to be delivered assembled (to its EMS providers, such as Foxconn and Pegatron). It is common knowledge that about 40% of the assembled FPC value for Apple (mainly the iPhone) consists of components; another 20% is assembly cost, and the remaining 40% is the value of the bare FPC. However, FPC fabricators do not disclose how much of their work is for Apple. A funny thing about Apple is it does not permit PCB suppliers to mention “Apple.” So, in Japan, Apple suppliers call it “B-company” or “Banana Company” instead. In Taiwan, it is referred to as “Fruits Company.” Such practice seems to be a part of Apple culture, almost as notable as its preferred black solder mask. (Sarcasm aside, the author loves Apple products.)

Roughly $6.7 billion of assembled FPC boards was estimated to have been delivered to EMS companies supporting Apple in 2015, judging from various rumors heard in Asia. If a 40:60 split is right, with 40% being bare board, the bare board portion is probably about $2.7 billion. That would mean the value of components and assembly was $4 billion for Apple products (FPC only).

Some large rigid board fabricators also engage in assembly. These include Compeq, GBM (a part of HannStar), TTM Technologies and Shennan Circuits, for example. Sanmina and Multek are subsidiaries of large EMS companies (Sanmina and Flex, respectively). Both seem to be engaged in some amount of assembly outside their parents’ operations. The assembly portion of rigid board fabricators is substantial, estimated at close to $1 billion. Here again, the situation is not simple. Some use internally produced PCBs for assembly, and some purchase PCBs from outside vendors. Whatever assumption is made on assembly value tends to be quite speculative.

As such, the author decided not to attempt eliminating assembly value from the output of PCB fabricators. More commentary on this subject later.
Other than that, the usual assumptions are made. All acquisitions in 2015 are treated as if made on Jan. 1, 2015. Therefore, the revenues of fabricators that acquired other fabricators are pro forma.

Some 104 PCB fabricators had revenue of $100 million or more in 2015 (TABLE 2). Viasystems, which was purchased by TTM Technologies on May 31, 2015, had 2014 revenue of $1.2 billion. TTM’s sales in 2014 do not include the revenue of Viasystems. Viasystems is listed at the bottom of the table to demonstrate its year-to-year growth rate properly. Other acquisitions don’t amount to much.

TABLE 3 summarizes the regional results of the NTI-100. China now has the largest number of top fabricators, one-third of the total. Even so, the author is afraid several Chinese fabricators may be missing. He has a gut feeling of their output, but guessing is dangerous. So, they were not included. Taiwan still has the largest value despite a smaller number of entries. (Note some 60% of Taiwanese companies’ output is now made in China.) In the case of Japan, overseas production value is now also much larger than the domestic production, also close to a 60:40 split. Nearly 100% of the growth at Japanese fabricators came from overseas production, notably from FPC business for Apple. 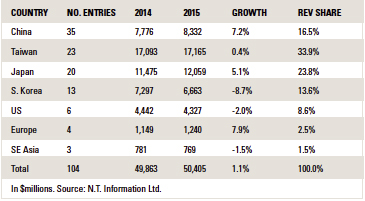 South Korean fabricators performed poorly for the second consecutive year because of Samsung’s reduced purchases of PCBs from domestic fabricators. Flexcom fell off the list because its 2015 revenue was only $65 million; it is now in bankruptcy. SI Flex went into default; although, its current status is not known to this author. As Samsung Electronics is back on the offense, Korean PCB fabricators seem to be breathing easier.

If the yen’s value did not fall so much, Japan’s production value would have been about $14 billion, much closer to that of Taiwan. If the current currency exchange rate holds, Japan’s share will jump notably percentage-wise in 2016.

Next year the US will lose MFlex, which is about to become a part of Chinese metal stamping company Suzhou Dongshan Precision. Since Dongshan Precision does not know much about PCB business, the author speculates it is likely to keep the current MFlex structure intact for a while. The Chinese PCB fabricator Shenzhen Fastprint Circuit purchased US probe card fabricator Harbor Electronics, as well as the UK’s Exception PCB two years ago.

A substantial portion of production “made” by the US, Europe and Southeast Asia comes from China. For example, 10 to 15% of Würth Elektronik and Schweizer Electronic comes from “trades.” 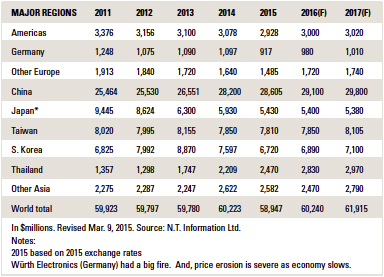 If the currency exchange rates in 2015 remained at the 2014 level, the world output in US dollars would have been $61.6 billion, a small increase, rather than the decline. With the UK (probably) leaving the EU, anything could happen in 2016. The next president of the US will also influence the world economy and, hence, the PCB business as well.

The author visited Asian countries several times in the past year. The most frequently asked question: Nakahara-san, what do you think of the automotive PCB market? With or without this question, many PCB fabricators are aggressively pushing into this market; this author estimates the 2015 market was about $5.2 billion and will top $7.5 billion by 2020, as the electronics content of the car continues to increase. Demand for more electric cars (PHV, EV and FCR, etc.) will require a large number of inverters and converters with heavy copper.

At this moment, Japanese and Taiwanese PCB fabricators capture more than 60% of the automotive PCB market. Both are pushing aggressively, particularly the Taiwanese, since their PC motherboard and HDI microvia board businesses are weakening, which drove up the Taiwan fabricators’ position. 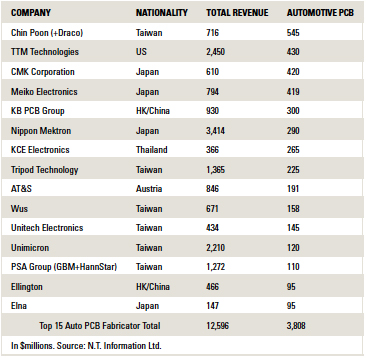 In researching this report, the author went through many financial reports compiled by PCB fabricators. One might think lower revenue would mean red ink. Insofar as Taiwanese fabricators are concerned, that is not true.

Some Taiwanese fabricators did extremely well in revenue, and profits were up accordingly. Some lost revenue but were resilient and remained profitable. Their respective financial performances are the envy of fellow PCB fabricators around the world (TABLE 6). Nonetheless, their profits are declining every year as price competition intensifies. The global decline in production value is due mainly to currency effects, but continued price erosion also has a big impact, despite volume increases. 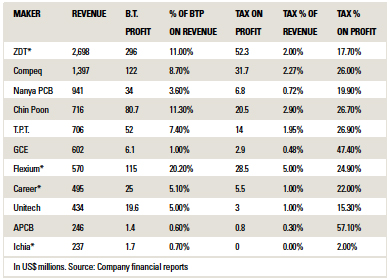 It does not matter if a PCB fabricator is small or big. The bottom line is, is it profitable?

In 2016, TSMC’s fan out wafer-level package (FOWLP) for the A10 application IC for Apple will have some impact on flip-chip CSPs, which will make the substrate business uncertain. Poor PC sales have reduced demand for motherboards, flip-chip BGA for main CPU, and HDD (which is being replaced by SSD, or solid state device). 2016 will be a year to watch from both the technology and market viewpoints.

The Bare Board Champion?

This year, the author decided not to go into detail of individual fabricators because he tends to get carried away, and the report will get too long. Large fabricators are typically public, and most seem to know what goes on with them.

Nos. 1, 2 and 3 in 2015 were Nippon Mektron ($3.41 billion), ZDT ($2.7 billion) and TTM Technologies ($2.45 billion). It is estimated TTM’s bare board portion is about $2.35 billion, while that of Nippon Mektron and ZDT are $2.1 billion and $1.895 billion, respectively. These two FPC fabricators’ revenues include a large number of components. The accuracy of these numbers is not guaranteed, but the author believes they are roughly correct.

So, if this assumption proves correct, the number one “bare board” fabricator was TTM Technologies.