ATLANTA – Electronic component market sentiment slumped to 86.0 in August, down 870 basis points sequentially, according to the latest Electronics Component Sales Trend survey from the ECIA.

The one relative bright spot, the trade group said, is the expected stabilization of market sentiment in September as the outlook calls for a level of 88.4. Measurements below the benchmark level of 100 indicate negative sales growth. 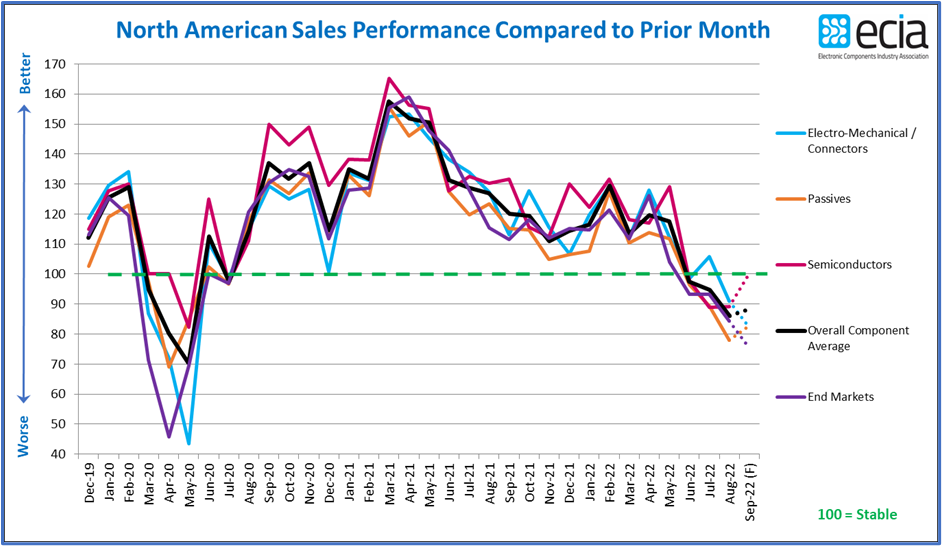 Expectations for the semiconductor market split significantly from the other markets. The index for semiconductors remained stable between July and August and shows a surprising jump to 100 for the September outlook. Passives show the weakest results as the index comes in below 78 for August. Expectations for passives and electromechanical components in September are roughly equal, above 82.

“Unfortunately, the picture from the quarterly perspective is even more bleak,” warned Dale Ford, chief analyst, ECIA, and author of the report. “The overall share of those expecting market growth collapsed from 50% in Q2 2022 to 33% in Q3 followed by average expectations of growth reported by only 24% of participants. On the other side, the percentage expecting a declining market worsens from 32% in Q3 to 37% in Q4.”