Is Tight or Loose Coupling Best for Differential Signaling?

Or should we just isolate noisy signals?

A known industry speaker says, “Everybody knows tight coupling is best for differential signaling.” This is stated in a tone of voice that implies those who don’t know this might be lacking. I sometimes say I am from Missouri, which is the “Show-Me State.” If the need for tight coupling is true, perhaps there is some proof. I am still waiting to see it. The following discussion will look at a tightly coupled differential pair and the same pair loosely coupled.

A good question is why did the traces have to be narrowed in the tightly coupled case? When any metallic object, whether another trace or a plane fill, gets near a transmission line, its impedance is driven down due to the added capacitance to the fill or nearby trace. To get back to 50Ω, the trace must be narrowed to return to the original impedance.

Often, the loss shown in Figure 1 does not concern a designer because the frequency is low enough that loss does not matter. Another concern may matter, however. If tight coupling is chosen, a potential problem can arise. Should it be necessary to separate the traces to route the signals through a pin field where they must be separated, after separation the traces no longer interact with each other and their individual impedances jump up to 70Ω. This is an unacceptably large change. Therefore, make sure all the signals can be routed without any separation. This is rarely possible. FIGURE 3 illustrates the routing cases for the two examples in Figure 1. 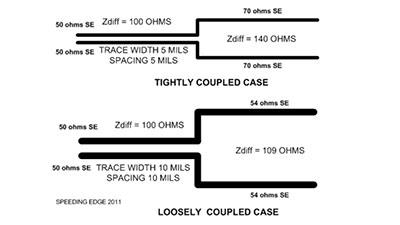 Most modern designs have component pin densities that make it difficult, if not impossible, to maintain tight spacing over the entire length of differential pair paths. For this reason, it is advisable to create a routing rule (separation) that ensures the problem shown in Figure 3 does not occur. FIGURE 4 illustrates how the impedance of a transmission line decreases as another transmission line gets closer. 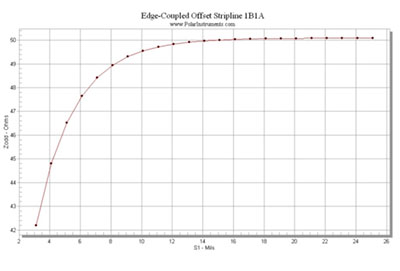 Figure 4. Impedance of transmission line as second line gets closer.

Across the bottom of Figure 4 is spacing to neighboring trace with 2 mils (51µm) on the left and 28 mils (710µm) on the right. The vertical axis is impedance,with 50Ω at the top and 40Ω at the bottom. This plot is for an off-center stripline with the height above the nearest plane 5 mils (127µm). Notice that at a separation of 10 mils (254µm) the impedance has dropped to 49Ω. If that decrease in impedance is acceptable, the spacing rule for routing has been established analytically, not by some rule of thumb such as the 2H.

FIGURE 5 is a plot of crosstalk in an off-center stripline layer as a function of height above the nearest plane and edge-to-edge separation. Notice as a victim trace moves away from the inducing trace, the magnitude of the crosstalk gets smaller. FIGURE 6 shows the two possible methods proposed for routing a differential pair: broadside at the top and coplanar at the bottom. In neither case is there common mode noise coupling. The reason is the magnitude of the offending signal diminishes as the location of the victim signal moves farther away, as shown in Figure 5. 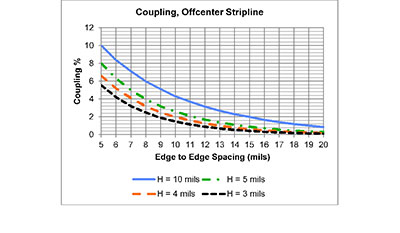 Figure 5. Crosstalk vs. height above plane and edge-to-edge separation. 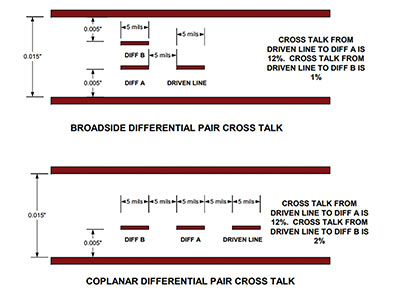 The best rule for routing a differential pair is to ensure any offending signal that could cause excessive crosstalk is kept far enough away from either member of the differential pair, so noise targets are met.

Tight coupling of differential pairs has few, if any, benefits. The best routing rule for differential pairs is a “not closer than” rule. This ensures there will never be a situation where needing to separate the members of a pair results in an unacceptable impedance change. This same principal applies to single-ended signals on a design as well.

Lee Ritchey is considered one of the industry’s premier authorities on high-speed PCB and system design. He is the founder and president of Speeding Edge (speedingedge.com), an engineering consulting and training company, and will speak at PCB West in September; This email address is being protected from spambots. You need JavaScript enabled to view it..