Among Designers, Compensation, Job Satisfaction on the Rise

Though older (and perhaps wiser), PCB professionals are pleased with their career choice.

For years – decades, even – we’ve noted the graying of the printed circuit board design profession. If PCD&F’s latest data are any indication, more than half of today’s PCB designers plan to work in the field for no more than the next 10 years. Salaries are high – as is job satisfaction – but so are years of experience. More than two-thirds of respondents to our annual survey of designers now surpass the 20-year mark.

This year’s version of the annual PCD&F salary survey contained a few new questions as we sought to get a better handle on not just where designers have been, but where they are going. New this year were queries on how long they plan to continue in the field; what software they predominantly use; even whether they are stretching beyond traditional electronic design responsibilities (ECAD) into the mechanical domain (MCAD/enclosures).

The survey of bare board designers, managers and design engineers was conducted in early summer. We received 301 qualified responses. Data compiled included job titles and functions, years of experience, location, types of projects, annual salaries, annual sales, job satisfaction and challenges, and ECAD tools used, to name some. While year-over-year changes are shown, they are for comparisons only, and should not be assumed to be definitive. 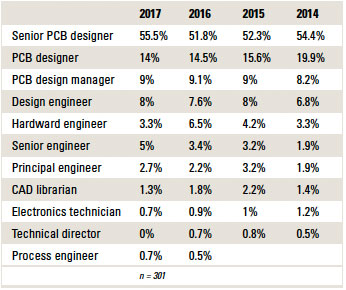 Job function. PCB design represents 75% of respondents’ principal job functions, including schematic, layout, placement, etc., up from 70% in 2016 (TABLE 2). Another 9% said their principal job function is PCB engineering, down slightly from 10% last year. Design/layout management accounted for 8%, down from 11% in the previous survey. Systems design was a new option on the survey, with 2.3% of responses. Engineering management accounted for 2% of responses, down from 4% in 2016. All other job functions were 2% or lower each. 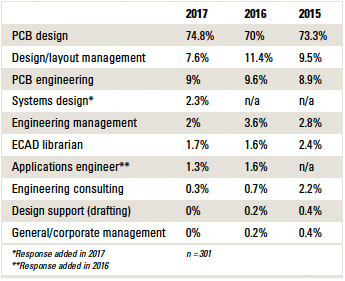 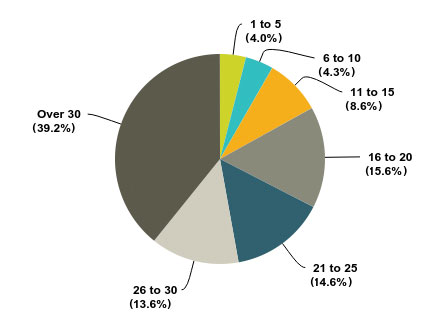 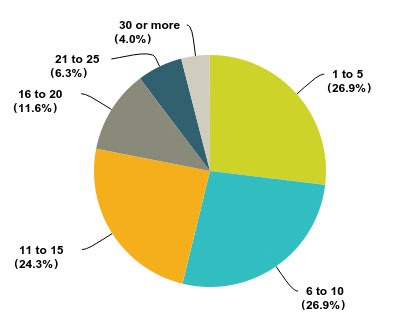 Figure 2. Years left as a designer. 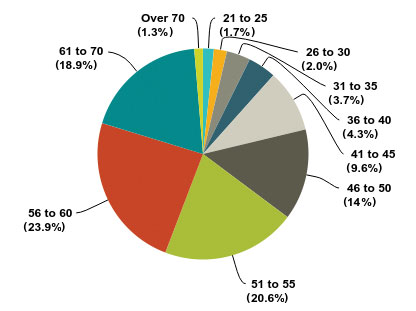 The good news: 75% said their job gives them significant fulfillment. The survey didn’t attempt to discern what made respondents’ jobs fulfilling, however. (More on that below.) 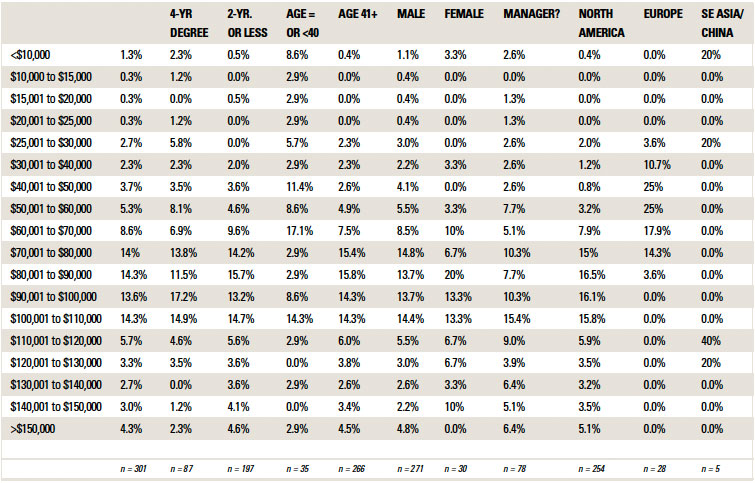 This year PCD&F asked designers if they are at or above the top of their company’s salary range for their job/position. Some 52% said “yes.”

Benefits. Survey respondents were asked what educational opportunities their companies support and checked all that apply. Opportunities increased across the board in 2017, with on-the-job training receiving the highest amount of responses, with 66%, up from 58% last year. Classes at conferences came in second, with 64%, up from 55% in 2016. More than 60% said their company offers tuition reimbursement, compared to 58.5% in the prior survey. Company-sponsored classes accounted for 47% of responses, up from 42% last year, and 45% of respondents said their firm offers mentoring, up from 33% in the prior survey. College classes are offered by 23%, a slight increase from 22%, and 12% said educational opportunities at their companies are not applicable, down from 17% in 2016.

The benefits picture for designers is strong in 2017 as well, with 89% of companies providing health insurance, according to survey data. This is up slightly from last year’s total. Three-quarters or more offer dental insurance, 401(k) plans and life insurance. Other benefits include:

For those who have degrees from four-year colleges, these are the subjects their degrees are in:

Certifications. Forty percent of respondents are IPC certified designers, up from 37% last year. Of those certified, 60% are CID, compared to 58% in 2016, and 39% are CID+, down from 42% in the previous survey.

Employment. Some 95% of respondents have the same job as 2016, flat with last year’s results. Two percent of those who took the survey said they were laid off in the past year, also flat with the prior survey.

Respondents predominantly work for OEMs (75%), compared to 73% in 2016 (FIGURE 4). Some 8% said they work for a design service bureau, compared to 11% last year. Another 6% work for both an OEM and design service bureau, down from 7% in 2016, and 6% said “consultant/academia/instructor/other,” up from 5% in the prior survey. Those who work for an EMS/contract assembler accounted for 2% of responses, nearly flat with last year’s results, while 2% work for a PCB fabricator, up from 1% in 2016. 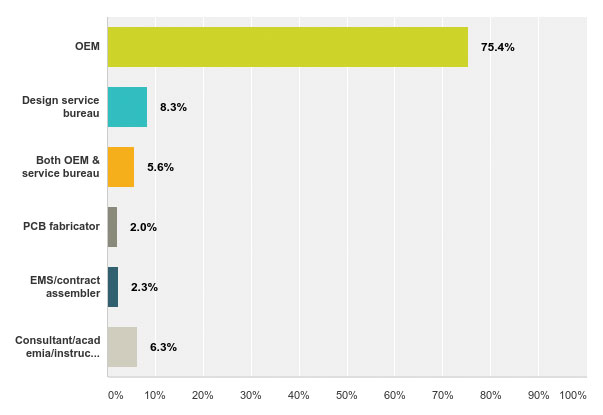 The respondents’ companies employ six to 20 circuit board designers globally at a rate of 28%, up from 24% last year. Sixteen percent employ only one designer, and another 15% employ more than 51 designers, both roughly flat with 2016. Some 10% have four to five designers, while 10% have 21 to 30. Others responses are included in FIGURE 5. 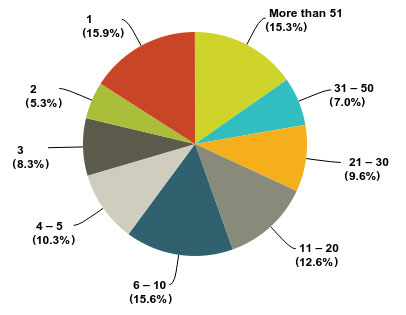 Outside the US, Central/Western Europe was the most common location, at 8%, followed by Canada (4%) and India (3%). Respondents from all other locations received less than 2% of responses each.

Some 74% of designers who took the survey said no one reports to them directly, up from 70% in the prior survey. Another 22% have one to five people reporting to them, compared to 23% last year. Only 2% said they have six to 10 employees reporting directly to them, down from 4% in 2016, while 2% are responsible for 11 to 20 staff members, nearly flat with last year’s results. Two respondents have more than 20 people reporting to them.

Responsibilities. Designers were asked what types of projects and/or technologies they directly engineer, design or layout; they chose all that apply (TABLE 5).
Here are their responses. Note the percentage handling mechanical designs. 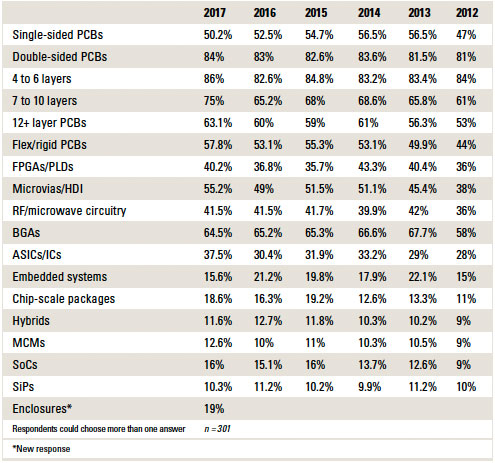 Respondents said they primarily design for these end-markets:

Challenges. When asked about designers’ biggest challenges for 2017, answers remained similar to last year. Job security seems to be improving among our sample. Respondents chose all that apply.

Software. Mentor, Cadence and Altium are the trifecta of ECAD tools for today’s printed circuit board designers, according to the survey. A new question on the 2017 survey asked which kinds of ECAD tools designers use on at least a weekly basis. Half the designers surveyed use some form of Mentor software weekly, and yearly, Mentor software is used by nearly 54% of those who completed the survey. Cadence software is second, with 45% of designers surveyed using one of the company’s products weekly, and nearly 50% at least once annually. With nearly 31% of respondents using Altium’s software on a weekly basis and 35% annually, the design software company came in third overall. 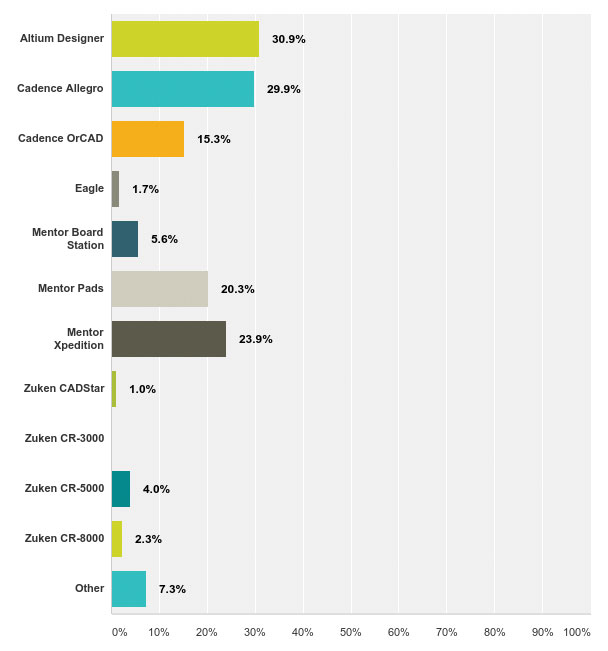 When asked which E-CAD tools designers use at least once a year, the answers were as follows: 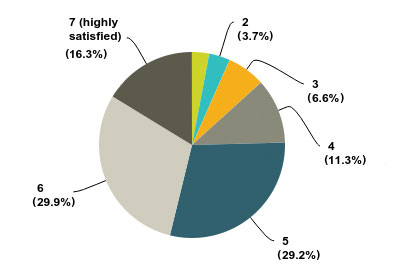 All in all, it adds up to a profession that is busy but happy in their chosen path.

Chelsey Drysdale is senior editor for PCD&F; This email address is being protected from spambots. You need JavaScript enabled to view it..

For a look at the past salary surveys, click here.