Software Success Was a Leap of Faith

Before Manny Marcano came to ECAD software sales, he jumped out of airplanes as a paratrooper in the US Air Force. Taking risks, it seems, is in his blood.

So, after selling tools for others in upstate New York in the mid-1980s – by his own account, he was a “lousy subordinate” – Marcano took the plunge. He cut a deal in 1989 to concentrate solely as a reseller of P-CAD and started EM Associates in his basement. As he recalls, “I pretty much was a one-man band. I got my family to stuff envelopes on the dining room table, and we did marketing things, but it was just old school, bootstrapping a business the hard way. There was no funding. I took a second mortgage on the house to fund the business. It’s a calculated risk that worked out.”

Thirty years later, EMA Design Automation is the largest value-added reseller of ECAD tools in North America, possibly the world. Its product breadth goes well beyond selling place-and-route tools. And its founder has laid the path for continued success for decades more.

ECAD in the 1980s and early 1990s was chaos. The market was growing fast and was full of vendors and resellers. OrCAD, FutureNet, P-CAD, Scicards, Pads, Calay and many other names, most of which have been relegated to the tech dustbin, were among software startups at the time. There were 10 to 15 VARs or distributors of various sizes, with Trilogic perhaps the largest. Industry was transitioning from dedicated hardware to PCs. CAD libraries were nonexistent, Marcano recalls.

Over its first decade, EMA extended its reach from P-CAD to ViewLogic and Pads. EMA added the Cadence line in 1998. After Cadence acquired OrCAD in 1999, EMA went all in, ending its relationships with its other vendors. It was, the ex-paratrooper says, a huge risk. Then a four-person company with sales between $1 million and $2 million, they  decided to bet its future on a single line, a highly unusual move.

Marcano remembers the time with mixed feelings. “That couple of years was probably some of the toughest I’ve experienced in my life. The OrCAD inside sales team was trying to find their place after joining Cadence. Because we had a rolling contract with Cadence, we were the only VAR left standing after the OrCAD acquisition. There was lots of uncertainty as Cadence absorbed OrCAD and had to figure out the product and sales direction for the business going forward. Thanks to our standing in the industry and our relationships inside Cadence, we were able to persevere.”

As EMA’s product lines evolved, so did its geographical reach. In 1995, EMA extended its territory to the Mid-Atlantic US. By 2003 its sales staff was covering all of North America.

It didn’t stand still from a product perspective either. What makes EMA different from its competitors, then and now, is its willingness to invest in its own IP. “We saw problems customers were having that were not being addressed by the mainstream PCB vendors. We decided to address these market needs ourselves. This really was a turning point in the evolution of the company,” Marcano said. As such, EMA has acquired several companies and technologies that enhance its position as an EDA player, including TimingDesigner (2007), DesignAdvance (2009) and Accelerated Designs (2016). The latter deal came after EMA lost a new customer to a competitor that had a library offering. EMA has also developed library and design data management solutions, and connected component parametric data directly to the CAD environment.

With its history of M&A and new tool development, has EMA become a full-fledged EDA company? “We are absolutely a VAR, just not in the traditional sense. We are the epitome of ‘value add,’ ” Marcano says, “We just happen to focus on building long-lasting value-added relationships with our customers.”

Yet, true to form, Marcano speaks of “global aspirations.”

“We have products that we either developed or have acquired that are seeing strong growth in North America. We are looking at ways to take this technology worldwide. The challenges for these engineering teams are the same no matter where they are.”

Still, the changing demographics of buyers and users represents the biggest shift EMA has seen in its 30 years. Designers of today are much more demanding, he says. “The 25-year-old engineers have a different set of expectations. They want things at their fingertips. They want content. They know the library should exist, and they don’t think they need to reinvent the wheel every time. And I agree with that.”

Indeed, features are in some ways taking a backseat to speed. Marcano doesn’t say it, but when you are jumping from planes, bells and whistles won’t save you. You need to know the parachute works when you need it. That experience likely colors his thinking today.

“Everything revolves around time to market,” Marcano asserts. “If the marketing department says, ‘We have to launch a product or get to a trade show’ or whatever it is, what’s the path of least resistance? We try to give the engineer the tools they need to get things done quickly, accurately and on time. Engineers are working nights and evenings to meet some deadline, and if they have to redo a BoM or research a new part because the first part they specified doesn’t meet obsolescence requirements, they are wasting time on things we can automate.”

In this last respect, he empathizes with users. “Every tool on the market right now will have its adoption challenges. Engineers get that. What they need is a vendor to help them get their job done effectively without causing delays. We do that through support as well as the IP we provide to automate as many tasks as possible with software. Engineering managers get that as well. They see when they’re buying engineering manhours back, and now they can get their engineers doing engineering work and not admin work. That’s a big part of our value proposition.

“The tools are all very capable,” he goes on. “We have found it’s the way the tools are deployed that can really differentiate and help our customers ensure success. That, and who you can get to support you.  Process, methodology, and support, have been more important to our success than any of the specific tool features.”

In the past year, EMA published a tome called the The Hitchhiker’s Guide to PCB Design. In it, Marcano wrote the time is now for the convergence of ECAD and MCAD, a process known as mechatronics. Again, he says, it’s all about time to market. “There’s no longer time to build a printed circuit board and build an enclosure in parallel in different departments, only to find the board doesn’t fit in the box or goes up in smoke because some device is touching the chassis. This problem has to be solved way upstream and collaboratively between the two departments.”

To that end, he is bullish on the future of 3-D printing. But he doesn’t think a change in the way PCBs are prototyped will portend an entirely new wave of software. “I’m sure the current set of software will work because it’s good stuff. But the fact remains it’s still about time to market. Imagine designing something for a car like an injection molding device with traces and passives on it, and you can knock that out in a lab. People are doing this stuff now in their skunkworks or their IP group. There’s always the problem of inserting parts, but all those problems will be solved [over time].  This is absolutely where we’re going.”

Meanwhile, he won’t be losing any sleep over the future of the printed circuit board. “The PCB is the only way to get something from concept to reality. It will soldier on. There will always be a printed circuit, no matter what the technology is.”

Now that Marcano is getting closer to retirement age, a succession plan is in place. “It is my firm belief that an organization cannot revolve around one person. There has to be a leader, but there has to be a succession plan.” True to his vision, Marcano has put three EMA staff through full MBA programs, one of whom is his son, Manny Marcano III, known informally as M3. That triumvirate will someday take over the firm.

From a company of two, EMA is now over 100 employees. It has survived market and demographic shifts and multiple industry recessions. Still, some things haven’t changed. Says Marcano: “The bottom line is people buy from people. This is my core belief, and I try to instill this in our culture. And, it is apparent in our positive and long-term relationships with our customers.”

About those long-term relationships. The longer one is in sales, the less likely their original customers are still around. Recently EMA was in the running for a deal with a major multinational corporation. Staff had traveled all over the country, visiting every site of the OEM. The day came to close the sale. As a senior manager at the customer gave the good news, he added the clincher: more than three decades earlier, Manny himself had taught him printed circuit board design.

“It goes back to the relationship,” Marcano concluded. “Financially it’s great, but morally and ethically I know I’ve done right by a lot of people. And here’s a senior manager at a multibillion worldwide organization who remembered me helping him out 30 years ago when he started his career.”

Maybe it wasn’t so risky after all. 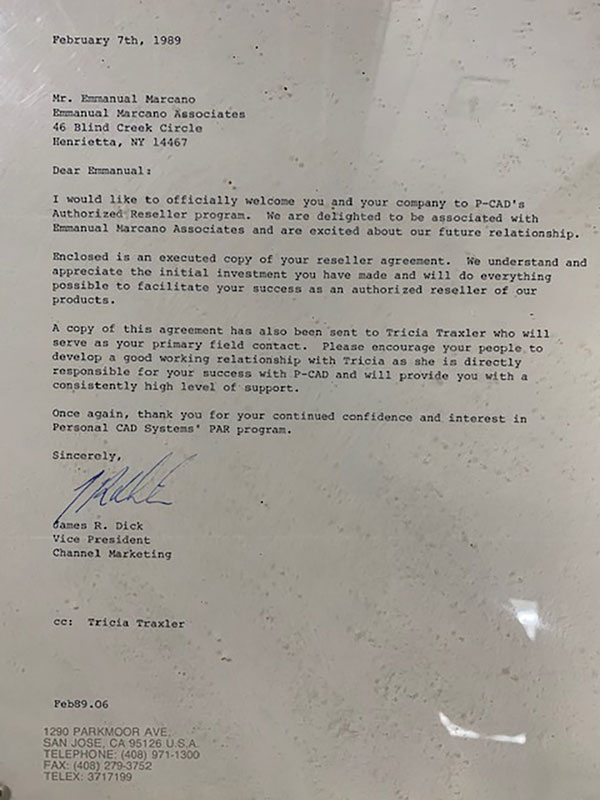 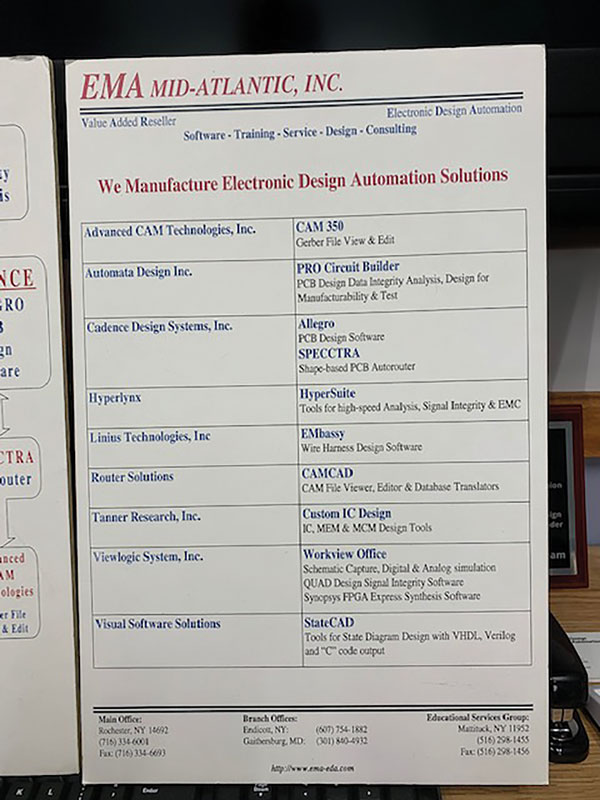 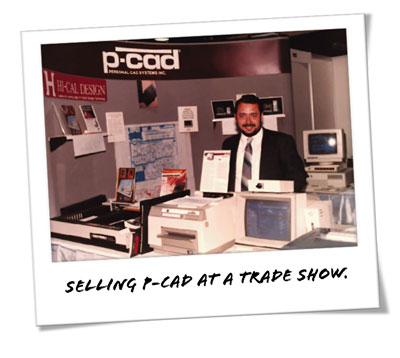 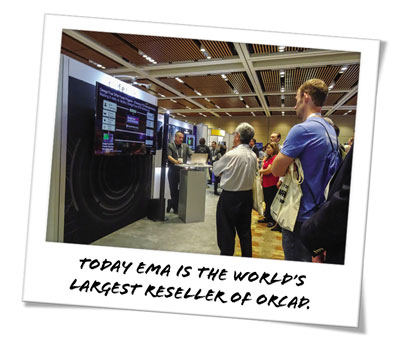 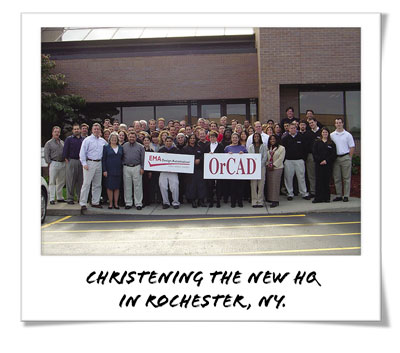 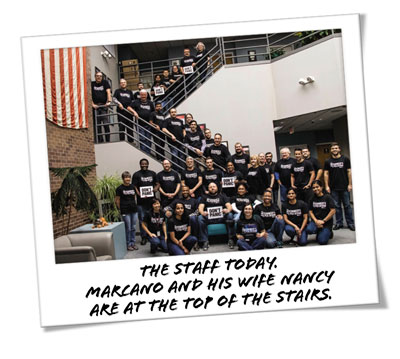