Why does ENIG or other lossy plated finishes increase insertion loss?

Insertion loss is the total loss of an RF circuit, consisting of the sum of four different loss components. The components are conductor loss, dielectric loss, radiation loss, and leakage loss. For most RF circuits using PCB materials, leakage loss is typically insignificant and can be ignored. This is because most materials used in PCBs have very high-volume resistivity that minimizes concerns for leakage. Some applications designed for very high signal power levels can be an exception, however. For this article, leakage losses will be ignored. Radiation losses will also be ignored for several reasons. Radiation loss has many dependencies, such as frequency, circuit design configuration, substrate thickness, and Dk. Radiation loss is much more likely to occur as the frequency increases, and, as a general statement, at microwave frequencies radiation loss is less problematic than at millimeter-wave frequencies. Additionally, circuits using thicker materials are more prone to radiate, and circuits with lower Dk are more prone to suffer loss due to radiation. The circuit design can offset the effects of many of these variables, however, and the circuit design has a large influence on radiation. In this study, circuits will be optimized for minimal radiation; therefore, radiation loss will be ignored.

Conductor loss and dielectric loss can have different effects on the total insertion loss due to circuit substrate thickness. Understanding when conductor loss and dielectric loss are more or less significant components of the total insertion loss for a circuit can be very important. FIGURE 1 shows a good illustration of how the difference in these losses varies due to the substrate thickness of the circuit.

Figure 1. Different impacts of conductor loss and dielectric loss, which make up insertion loss for circuits using the same material at different thicknesses.

The insertion loss curves use a microstrip design configuration and are 50Ω transmission-line circuits. All these circuits use the same high-frequency circuit material, with a Dk of 3.48 and dissipation factor (Df) of 0.0037 when tested at 10GHz per IPC-TM-650, 2.5.5.5c. The only differences for these circuits have to do with substrate thickness, as noted in the title of each chart. To maintain 50Ω impedance for each circuit, conductor widths vary accordingly.

The common legend for all three charts can be found in the middle chart, where the measured insertion loss is shown with the thick violet-colored curve. The other curves are from models using software based on Hammerstad and Jenson1, with closed-form equations to define microstrip insertion loss, impedance and effective Dk. The modeled curves show the predicted total loss (insertion loss), as well as the conductor loss and dielectric loss, which are summed to equal the insertion loss.

The chart in the middle is based on the use of a 10-mils-thick substrate. As can be seen, there are more conductor losses than dielectric losses, which make up the total loss. Additionally, the top chart shows results based on circuits with a thinner, 6.6-mils-thick substrate. There is a significant increase in conductor loss compared to the 10-mil-thick circuit. This behavior is typical, where the conductor loss will dominate the overall insertion loss as thinner circuit substrate materials are used. In contrast, the bottom chart shows circuits made on the same material, although with a thicker substrate. The dielectric loss dominates the total loss of the circuit.

As a practical example of the circuit thickness dependencies, if a circuit is 6.6 mils thick, and the insertion loss needs to be improved, then changing the conductor characteristics to have less conductor loss is most important. In other words, if the loss performance improvement was to use a different 6.6-mil-thick substrate material with lower Df (Df is associated with dielectric loss), then this would be a poor choice, since a reduction in dielectric loss would not make as significant an impact on the total loss compared to a reduction in conductor loss. In contrast, a change of material using lower Df for the thicker circuit shown in the bottom graph would be appropriate. The summary is thinner circuits are dominated more by the conductor loss, and thicker circuits are dominated by dielectric loss. 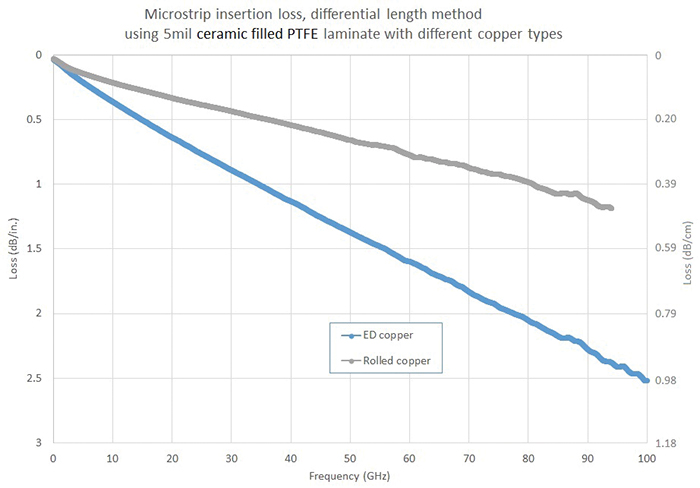 Figure 2. Insertion-loss comparison of the same substrate material but with two different copper types, with different amounts of surface roughness.

As a side note, copper roughness also impacts wave velocity, where circuits with rougher copper will have a slower phase velocity. If an evaluation is done on circuits with different copper surface roughness and the same substrate material, the circuit with the rougher copper will perceive a higher Dk value. Basic electromagnetic wave theory states a slower wave is related to a higher Dk, and, in this case, the Dk of the substrate is unchanged. 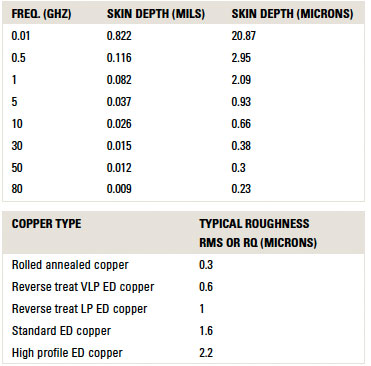 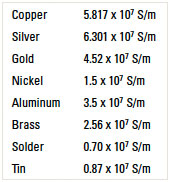 A common final finish used for years is ENIG (electroless nickel immersion gold). This finish is good for many aspects of PCB applications; however, it does cause more conductor loss. The main reason ENIG causes more loss is due to nickel being about one-fourth the conductivity of copper. There is potentially another reason and that is losses related to the imaginary component of relative permeability. Permeability is related to magnetic fields and is the analog of permittivity (Dk) for electric fields. Nickel is a ferromagnetic material with a relative permeability of about 500 and losses associated with that characteristic. However, the ferromagnetic loss component is very difficult to quantify for conductor loss because nickel used in PCBs is not pure, but an alloy doped with other metals, which can reduce the magnetic properties. For this article, the ferromagnetic variables related to insertion loss will be ignored. 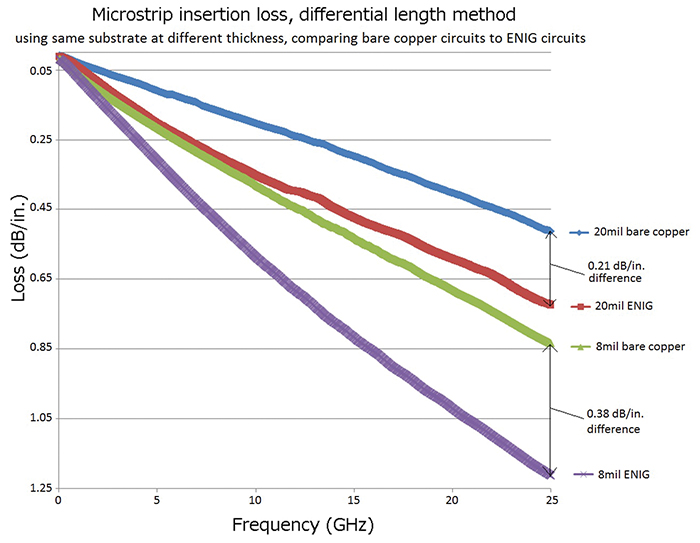 Figure 3. Comparison of insertion loss with circuits made on the same substrate but different thicknesses and circuits tested as bare copper and circuits with ENIG finish.

The insertion loss difference for the thinner circuits (8 mils thick) is 0.38dB/in. when comparing circuits with bare copper and circuits using ENIG as the final finish. The substrate material was a low-loss thermoset hydrocarbon material with a nominal Dk of 3.38 and Df of 0.0027 when tested at 10GHz and in accordance with IPC-TM-650, 2.5.5.5c.

Another consideration is why does ENIG or other lossy plated finishes increase insertion loss? The circuit configurations shown thus far are microstrip, which is a simple double copper layer circuit with a signal conductor on top and a ground plane on the bottom. Most of the electric fields are between the signal plane and ground plane, and the final finish does not have access to that interface. However, if an electromagnetic model is created for microstrip, a very large increase in current density at the edges of the signal conductor will be found. 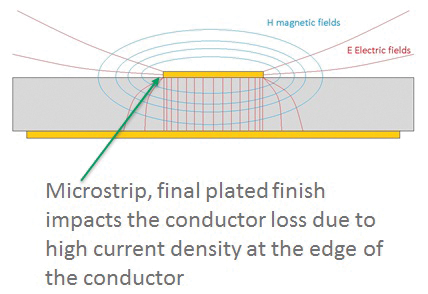 Figure 4. Electric and magnetic fields representation of a cross-sectional view for a microstrip circuit.

It is at these corners, where conductor meets substrate on the microstrip circuit, that the final finish has an impact on conductor loss. It is an accumulative effect, where if the circuit has a short physical length, the impact due to the final finish will be small. However, if the circuit has long physical length, the impact of the finish on conductor loss will be increased.

There are other circuit design considerations, although stripline is essentially immune to the impact of final finishes, assuming plating is added to the outer ground layers only. Another circuit construction commonly used for higher-frequency applications, which can be much more impacted by final finishes, is GCPW. This structure has two copper layers, and the bottom layer is the ground plane. The top copper layer has an electrical configuration of ground-signal-ground (GSG), and this is the coplanar layer. There are coupled electric fields between the adjacent ground planes and the signal conductor on the coplanar layer, as can be seen in FIGURE 5.

The GCPW circuit will be more impacted by a lossy plated finish than will the microstrip circuit because the final finish is in the coupled areas, and four layers of the finish are used by the circuit. If the GCPW is loosely coupled, then the impact of the final finish is less, and if tightly coupled, the finish will have much greater impact on conductor loss. The tight and loose coupling has to do with the space between the GSG lines. When the space is small, the electric fields couple very strongly between the adjacent ground planes and signal conductor. 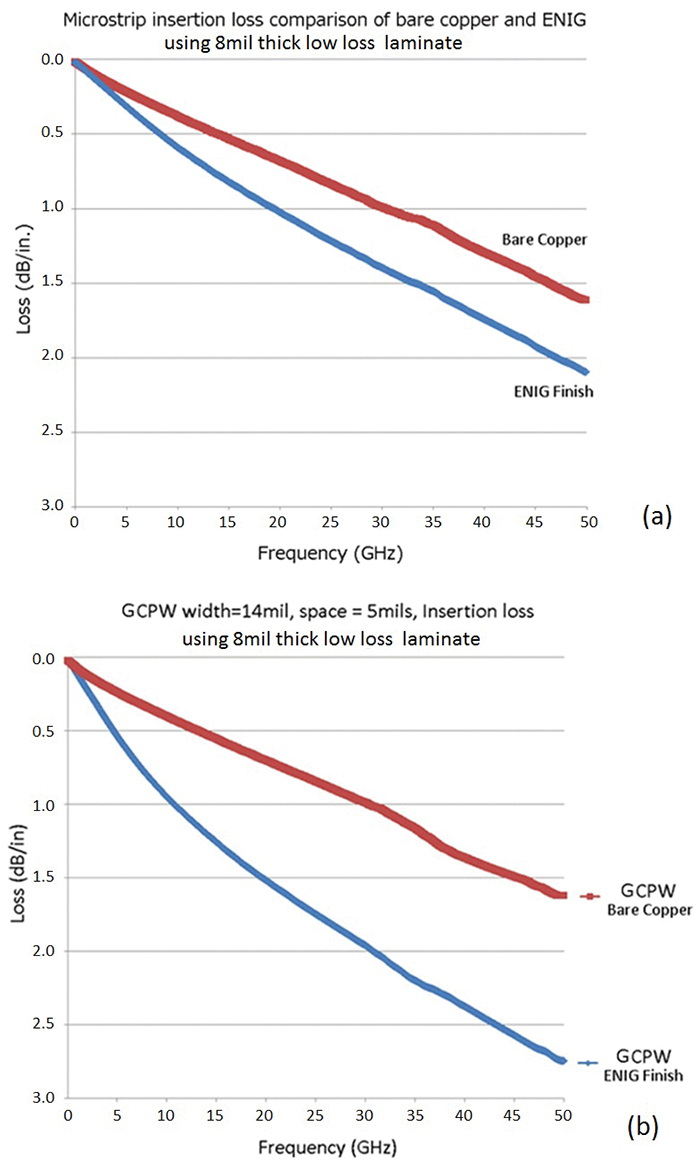 Figure 6. Comparison of microstrip (a) and GCPW (b) using same materials and comparing bare copper to ENIG.

An evaluation was done considering several common final finishes. As part of the evaluation, OSP and solder mask were included as well.

The test vehicle was a microstrip transmission-line circuit, using a thin extremely low-loss substrate. The substrate was clad with the smoothest copper available, a rolled annealed copper. The laminate has a Dk of 2.94 and Df of 0.0012 when tested at 10GHz and in accordance with IPC-TM-650, 2.5.5.5c. The transmission-line circuits had a characteristic impedance of 50Ω and were within ±5Ω. The test method employed the microstrip differential length method3, which minimizes the influence of the connectors and reports the overall insertion loss of the circuits more accurately.

The curves in FIGURE 7 are approximately correct; however, the circuits had poor return loss at frequencies above about 40GHz. This is why there is noise in the insertion-loss curves after about 40 or 45GHz. This wideband response was given mostly to show overall trends across a very wide range of frequencies. However, it is better to truncate the data within a range where the return loss is good and the results more stable. 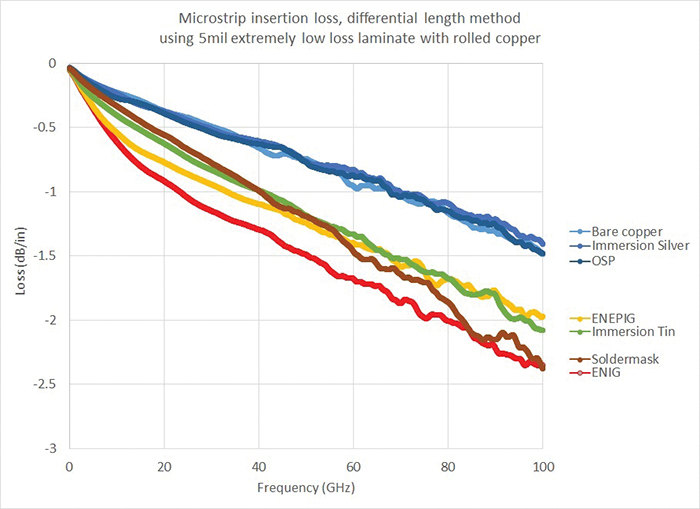 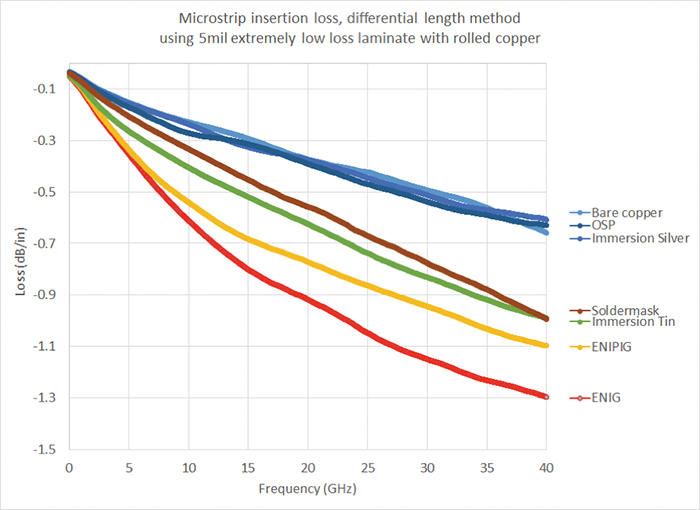 The immersion tin curve (green) is probably a worst-case scenario based on other studies. The data are valid, but they indicate a little more insertion loss than previously seen using circuits with immersion tin from different studies.

One last comment concerning a similar study in which it was noted ENIG had minimal effect on insertion loss. That particular study used 20-mil-thick FR-4, which has very high Df, and the amount of conductor loss was minimal. The insertion loss comparison between bare copper circuits and circuits with ENIG was done at 10GHz. The insertion loss of a 20-mil-thick FR-4 microstrip circuit at 10GHz is strongly dependent on the dielectric loss. Comparison of the different losses shown in Figure 1 is based on a low-loss material; the curves would be very different if FR-4 materials had been used. For reference, similar insertion-loss curves with the different losses shown, using 20-mil-thick high Tg FR-4 materials, are illustrated in FIGURE 9. 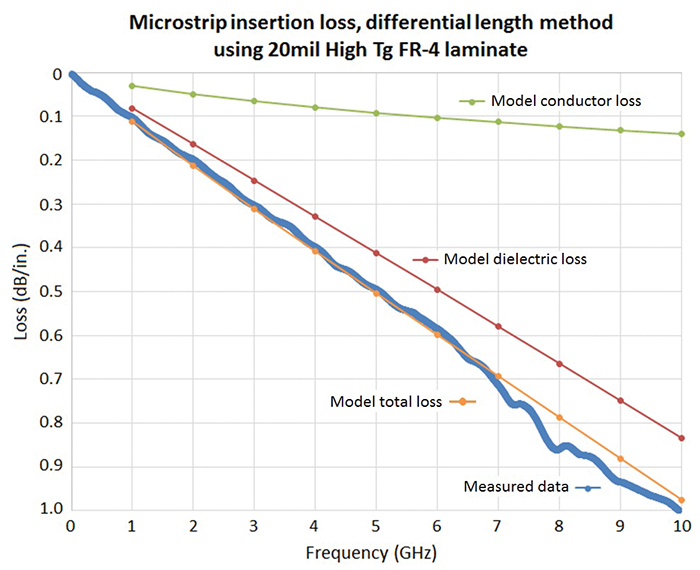 A microstrip circuit using 20-mil-thick FR-4 material is not a good test vehicle to evaluate the impact of ENIG on insertion loss. ENIG impacts conductor loss, and the circuit performance shown in Figure 9 shows an FR-4-based circuit is not sensitive to differences in conductor loss.

In summary, a number of variables have been found to impact the insertion loss of high-frequency and high-speed circuits, including the choice of copper-conductor plated finish. When insertion loss must be minimized, variables such as substrate thickness, Df, copper surface roughness and design-type of transmission line affect a high-frequency circuit’s conductor and dielectric losses. These losses combine to contribute to the overall loss, insertion loss. Besides final finishes, conductor loss can be affected by material and circuit properties. Higher frequencies and thinner substrates will cause increases in conductor loss, and the type of final finish can influence this loss.

Rogers Corporation would like to thank MacDermid Enthone for their expertise and cooperation with this study.

Ed.: This article was first presented at SMTA International in October 2017 and is published here with permission of the author.

John Coonrod is technical marketing manager at Rogers Corp. (rogerscorp.com); This email address is being protected from spambots. You need JavaScript enabled to view it..