Taiwan Printed Circuit Market Finished in the Green. Sort Of.

Shipments from the printed circuit industry can arguably be considered a barometer for the global electronics market.

With that said, PCB shipments for December are a little cloudy and complicated; further explanations follows. Total revenue from Taiwanese PCB manufacturers in December 2019 was NT$56.28 billion ($1.87 billion), an 8.24% decrease from the previous month and a 15.74% increase from the same time in the previous year. Now, we can review the annual performance of the year. Total revenue for 2019 was NT$639.2 billion ($21.2 billion), a 1.48% increase from the previous year. Rigid circuits grew by 1.99% with mild fluctuations throughout the year. The Flex circuits segment posted negligible growth at 0.15% while experiencing wild fluctuations in demand throughout the year.

The growth rate during 2019 was green, but there was a sharp decline during December 2018. Without this decline, the industry could have recognized a decline in volume for 2019. The category that posted the largest decline in the electronics industry was mobile devices. This market decline of the smart phones began four years ago, but manufacturers continue to increase their manufacturing capacities.

Global semiconductor shipments are another growth indicator for the electronics industry. Volume grew during 2017 and 2018, but declined during December 2018, mimicking Taiwanese PCB volume for the same period. The market showed a slight rebound during the second quarter of 2019, but could not sustain momentum and declined over the next few months. The graph pasted below is a monthly breakdown for semiconductor shipments by regions: 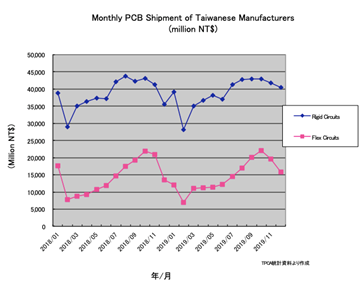 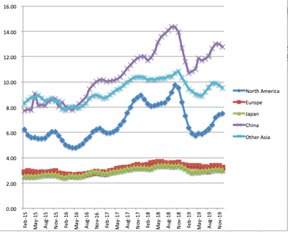 Global semiconductor shipments, in US$ billions.

This summary did not take into account any events that occurred during December 2019 that could have an adverse reaction for the industry. In short, the coronavirus continues to have a business impact in China. Japan will not allow visitors from Wuhan, China, and the virus is now a threat for Japan. The supply chains and consumer products manufacturing are taking big hit in China, but worse is the personal suffering for many. My heart goes out for those who suffered family tragedy. I am optimistic that a cure and vaccination will arrive shortly.

Dominique K. Numakura, This email address is being protected from spambots. You need JavaScript enabled to view it.

Headlines of the Week

3. Murata (Major device supplier in Japan) restarted operation of manufacturing in China, except Wuhan Province, on Feb.10. The company said the safety and good health of the employees are the first priority.

4. JAE (Major connector supplier in Japan) unveiled the first washable connector series “RK01” for wearable electronics devices. They can be mounted on the suite by traditional sewing machines.

6. Isaiah Research (Market research firm in Taiwan) expects Chinese smartphone manufacturers shipments to decline15 ~20% during the first quarter 2020 due to the coronavirus in China.