I’ve said this many times, and it is true: The Taiwanese PCB industry is a great barometer for the electronics industry.

Taiwan is the global manufacturing center for consumer electronics, and Taiwanese PCB manufacturers have accurate procurement plans from end-customers and EMS companies. The sharp decline during the last quarter of 2018 is a good example of the barometer predicting an outcome.

PCB monthly shipments for the first three quarters show some positive growth compared to the same periods of the previous year. However, growth was stagnant during October and November, and declined significantly in December. Clearly things were slowing and the global electronics industry feared a recession.

The graph shows a decline shortly after December for the industry, and related industries that include components and materials posted similar declines. 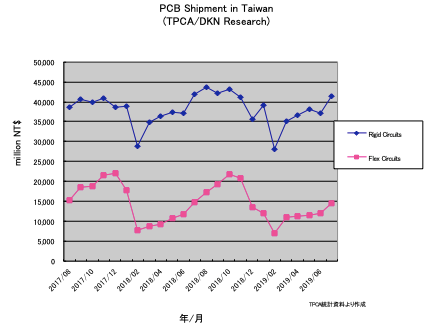 Market data for the first half of the year shows that shipments are flat, and several market analysts are predicting the industry is at the bottom. They go on to say there could be a rebound for the second half of the year.

I am not as optimistic. The latest monthly PCB shipments in Taiwan are negative compared with the same time last year. I surveyed a few manufacturing buyers about the current state of their business, and they claim that shipments of PCB materials are slowing and are less than the same time last year. Many PCB manufacturers now have a conservative stance when making additional investments earmarked for business expansions.

So, as Taiwan goes, do global markets follow? There are a lot of pokers in the fire that are stirring up an uneasiness for the industry – trade wars, political agendas, Brexit, Turkish financial crisis – pick one! There are some many things that can affect the buying habits of consumers.

I have faith that management teams for many electronics companies have seen this before, and are considering plans to hedge any downturn in business. The bottom line is that everything has a cycle, and you just have to know where you are in the cycle.

Dominique K. Numakura, This email address is being protected from spambots. You need JavaScript enabled to view it.

Headlines of the Week

5. LG Display (Major display supplier in Korea) has an aggressive expansion plan in China for manufacturing of organic EL panels to keep the leading position in the global market.

9. Sharp (Major electronics company in Japan) released a high-end smartphone for the European market with 8K+5G and AIoT (Artificial IoT).