The West Coast-based fabricator is turning boards up to 30-layers as fast as they get them.

Sometimes two are better than one.

Take Prototron Circuits. The 30-plus-years-old board fabricator operates two factories in the Western US, and while they are hours apart by air, insofar as how the company sees them, they might as well be on the same campus.

In May, PCD&F visited the printed circuit board fabricator at its facility in Redmond, WA. The plant, which doubles as the company headquarters, is about 1,500 miles northwest of its other site in Tucson, AZ. But in the minds of the staff, the two plants act as complementary standalone facilities, serving thousands of customers each year.

“They do things we don’t do, and we do things they don’t do,” said Mark Thompson, engineering support, who gave the factory tour. He and Lee Salazar, Western Washington sales, answered questions before walking PCD&F staff through the 25,000 sq. ft. plant. (The Tucson facility is 20,000 square feet.)

Prototron’s origins date to 1987, when it was launched by a local engineer named Dave Ryder. While sales have grown organically through the years, the company has also made timely acquisitions. In 1997, Prototron acquired Cir-Quick – Ryder’s former employer – giving it its current manufacturing space. Two years later, it bought Tucson-based Southwest Circuits, adding a mil-spec capability and extensive specialty material expertise to its offerings.

Tucson has 45 staff members and can make aerospace flight boards, while Redmond has 52 employees and builds hybrid and high-layer-count boards. Redmond can do immersion gold/HASL, while Tucson does hard gold for PCIE connectors. Redmond also builds aerospace engineering prototypes.

Both plants are ISO certified; Tucson also has AS9100D registration. Equipment sets are “essentially the same” in both plants. Redmond can build 3 mil lines/spaces on 0.25 oz. foil, while Tucson can do 4/4. 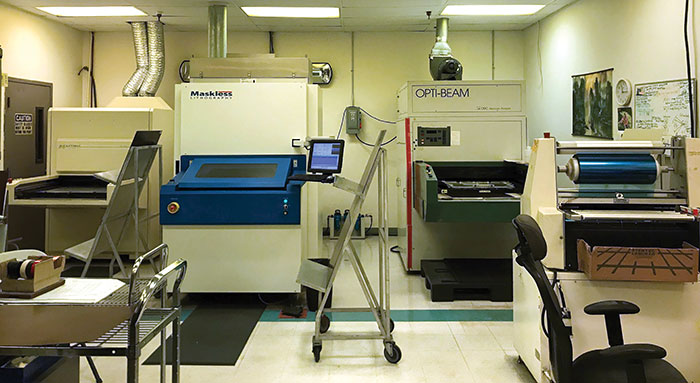 Prototron says its model relies on keeping up with customer requests. One such example: via-in-pad, which Prototron fills with epoxy.

“We train customers to give us the right packages and ask the right questions,” Thompson noted. “We have a customer special requirements database for the hot buttons of each customer.”

That database includes all sorts of unique customer requirements, from using antistatic bags for shipping to building to IPC Class 3 performance specifications for plating only.

According to Thompson, “everything is getting smaller.” Prototron can mechanically drill holes down to diameters of 0.0059". Laser drilling is outsourced offshore.

The company’s biggest technology concern is “making sure controlled impedances are correct,” he added.

“They are usually very high: around 4.5. At four or five mil trace, Dk is considerably lower than what’s on a customer’s PDF file,” said Thompson.

They added, “We only do film for solder mask and IDs. Most shops don’t use phototools anymore.”

Production bottlenecks are typically in plating and electrical test. It used to be drilling, but investment in new Schmoll machines ramped drilling speeds five to six times over the old machines. Prototron also recently added an epoxy via fill machine.

Prototron Circuits accepts IPC-2581 and ODB++ files. It prefers ODB++ because it “won’t have any missing netlists.” IPC-2581 “includes all image formats. Fabricators have to compare them. ODB++ is a whole lot easier.” 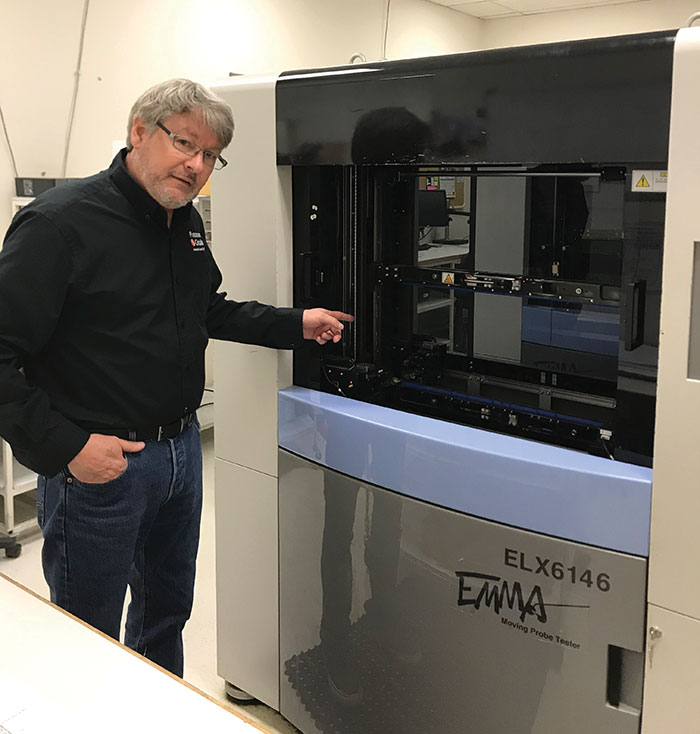 …and a Shrinking Supply Base

From a business perspective, the seemingly constant shrinking of the number of suppliers weighs on Prototron. When asked about the firm’s biggest business concern, they said the health of the industry, noting large shops are “swallowing” smaller ones. Moreover, the larger fabs aren’t “servicing the small [OEMs] for prototypes.”

For its part, Prototron sees a business opportunity. Prototypes are its business, and it does “as much as possible.” It can turn 16-layer boards in 24 hours, and 30-layer boards in three days.

In Redmond alone, Prototron has more than 5,000 customers, and no single customer makes up more than 10% of its business. Much of its business comes from the vibrant EMS community. (See a related article on Applied Technical Services, July 2019.)

“We have contracts with all the local assemblers and contract manufacturers,” Thompson said. “We do everything based on local customer need, not buzzwords.”

That approach is strained at times. For instance, when material lead times get extended, smaller shops like Prototron must plan creatively. Recently, for instance, a major supplier of specialty material pushed its lead times to five weeks. “If a customer has a three-day turnaround, that’s a problem. This is pervasive, even for large shops,” the firm told PCD&F.

Prototron has an extensive CAM worksheet that inside sales fills out; these are the instructions for the CAM operator. There are three dedicated CAM stations. It uses Frontline Valor CAM software and Polar SI 8000 software. The field solver has hundreds of different models, including broad-side structures. Engineers can put in numbers for all 26 processes.

The company uses Frontline Genesis 2000 software to create a preview database and work order number. Here, it can import files such as ODB++. Insight PCB, also from Frontline, performs pre-CAM functions, including some design rule checks and analyses. This process allows sales to quote properly and saves time, Thompson said.

CAM operators perform drill compensations to account for known loss in the etcher, etch compensations, and scale factors. “The thinner the core, the higher the scale factor,” Thompson said.

The Redmond plant is straightforward, with conventional processes for imaging, develop/etch/strip, and lamination, drilling, a vertical plating acid copper bath, and post-etch punch. Both sites handle a variety of materials, including polyimide, with Tucson some aluminum-backed flavors. Prototron handles a “considerable amount” of 2.5 mil cores, which it processes in 12 x 18" and 18 x 24" panel sizes.

Prototron boasts three types of imaging: an Accuprint AP30 5000 Power Plus, one of the oldest machines on the floor; the newer DI machine for maskless lithography, which it uses 85 to 90% of the time; and an Opti-Beam dry-film exposure unit. Prototron uses it for solder mask prior to developing. Direct imaging is used for circuit layers.

Next up is the purchase of an ultrasonic cleaner.

Prototron performs visual inspection of innerlayer cores to check lines and spaces and uses AOI to look for shorts and opens. If a defect is found at AOI, it is reprinted until it passes, Thompson said.

In the lamination layup area, operators process up to 32 different boards at a time. Separate machines are used for hot and cold press. Extended cool downs are used to eliminate bow and twist.

The new Schmoll Multi-X Axis drill has a wide range of tool sizes available. It uses laser blocks to determine – as Thompson colloquially said, “Yeah, I like that bit” – and then drills it. “It’s six times faster than the old machine.” The linear drive has 10-ton granite blocks underneath to keep the machine in place.

“Ten years ago, this was a bottleneck. We can now drill faster than plating.”

The solder mask area contains an ITC Intercircuit epoxy fill machine. Holes are filled completely with epoxy by means of a hydro-squeegee, then plated to encapsulate them. The specific size range is 0.008" to 0.020". Later, the boards are lightly scrubbed before coating with a DP 1000 automatic flood coater: 1 mil over glass/half a mil over copper.

Next up: the tack cure oven, followed by liquid photoimageable imaging. Ovens are at full bake with a potassium carbonate solution, and then the boards are surface-finished. Prototron offers LPI solder mask, NiAu and ENIG finishes, and even HASL. (“There are still folks who want it,” Thompson said.)

For signal integrity, a standard set of six questions are asked, plus two additional questions:

In a dry lab, Polar software is used to test for ionic contamination.

Prototron Circuits is affiliated with local universities, as well as universities across the country. Thompson guest lectures for engineering students and provides those same lectures for customers. One such company is Monsoon Solutions, which he visits five times per year to educate employees.

“Monsoon can order one- to three-day turns for board designers,” he said. “We can get any of their impedances to work.”

When it comes to demand, Prototron is fortunate, having the benefit of the aerospace industry. Work comes in “all year round (because) launch times don’t coincide with budget releases two times per year. Demand will always continue.”

The two shops may be miles apart, but the vision of CEO Ryder is instilled and prominent in both. As Russ Adams, national sales manager, said, “Prototron is known for service, reliability, on-time delivery, integrity and knowledgeable customer support. That goes for both facilities. We both live by the same principles.”

Chelsey Drysdale is senior editor of PCD&F/CIRCUITS ASSEMBLY; This email address is being protected from spambots. You need JavaScript enabled to view it..