In a perfect world, there would be truth in advertising.

It would be jaw-dropping to hear a politician say:

“My statements yesterday regarding the ignorance of voters on the issues of the day were not taken out of context. I meant every word I said, down to the last comma, semicolon and exclamation point, and I stand by them. Many of you don’t even know what a semicolon is, much less how to use it. What’s more, exploiting that gift of voters’ ignorance has propelled my political career and enhanced my electoral viability. Systems are meant for gaming, and I’m seizing the moment my schooling and ambition has set for me. Here in the land where preparation meets opportunity, mine eyes have seen the glory. God Bless America!”

Or to hear a certain classism laid bare with this frank preschool prospectus:

“Vanilla Bean Curd Country Daycare is obsessed with our Mission of empowering little ones to succeed in life, especially when they matriculate and become Big Ones with Influence. Fortunately for you, the aspiring parent of a Young Chancer, there’s us. One must start early in the relentless pursuit, cultivation and maintenance of privilege through an awareness and employment of the baser survival and mobility instincts. We are unabashedly proud to be the proverbial first cobblestone on that Machiavellian road. Right Daycare begets Right Preschool begets Right Kindergarten begets Right Elementary School begets Right Prep School begets Right Ivy League School begets connections and prominence and money to support multiple couplings, families and schooling for children from those sources. Repeat the process with new children. (See our rankings.) Get real before you get squashed. It’s a competitive world, and connections matter more than ever. Make them here. Skip the line. You’re with Our Kind. Get the cash flowing. What will it be? Winner or loser? A lifetime beckons. With us, your little darlings have ‘high’ and ‘worth,’ as in ‘High Net Worth,’ emblazoned on their skulls like QR codes. You’ll thank us with your donations.”

This is not a perfect world. Agendas like those displayed above remain hidden. For a reason. We are left to figure out motivations on our own.

So it is with Partnership. The term has become elastic. Seller beware.

He pulled up one fine day in a Tesla. (It’s always a man.) The indicative license plate proclaimed M3MYS3LF&1. Sic transit gloria mundi. So was his lack of spatial reasoning: The vanity-plated rolling declaration was parked at a 30° angle to parallel. Sartorially to match: No tie. No socks. No obvious laundering of his attire. Shabby chic. Nonconformity as conformity. Visionaries want to make a statement, and trivialities like rules are for Little People. So he declared to us, without prompting or an ounce of shame, with that subcontinental swagger typical of those who write code, hit the jackpot once, and thereby think they know everything and deserve admittance to elite circles. They want to share their enlightenment. They make their own rules. Thus, people need to be reminded of their place in the Silicon Valley caste system, pretensions to egalitarianism be damned. Be grateful Greatness has arrived to grant you time with His Presence. Keep your prejudices to yourself. Maybe, just maybe, you’ll get in on the IPO.

He had a Great Idea. (Of course he did). He needed help refining his process. Things weren’t quite fitting together. Parts were cracking – or breaking apart prematurely while in use and still under warranty. This was embarrassing. Certainly not befitting a Visionary. The nominal design software data weren’t meshing with the actual part data. Heat maps were glowing red, not a good color. His additive manufacturing process was subtracting from his cashflow at an unplanned rate, and he needed to know why. The VCs were furrowing their brows and demanding answers. Where were the defects coming from? What was their extent? For answers to these mysteries, he needed his parts CT scanned. Colleagues pointed him to us. Thus, he came to be parked at an off-putting angle in front of our building. He needed help.

We had a CT scanner. He didn’t. His problem was our solution. Thus, free exchange is born. Naturally, he wanted a Partnership, but first he had to dazzle.

He beckoned with warm, ingratiating buzzwords, or so he thought. Series A, B, C and D rounds of funding. Stanford pedigree. A-list board (gratefully lacking some of the same astute judges of character who recognized potential in Elizabeth Holmes). Tons of pending orders. Huge upside potential. Ad infinitum. The firehose analogy is accurate: Overwhelm the prey with details. Don’t allow them to interject a doubt or a skeptical question. Never stop talking. Allow them to bask in the glow. Control the subject and drive the bandwagon. Cultivate greed and envy.

We sat through a condescending PowerPoint about his soon-to-be iconic company and its game-changing products, designed to make fluid flow faster downhill. (Relative to what?) He is in search of trusted, durable Partners who can help him make his product better and get it to market faster. (That flow thing again.) Are we of like-minded ambition, enthused about joining him?

What does “joining” mean? Does it come with a number assigned to it, with multiple trailing zeroes?

Perhaps it’s a function of age, growing irascibility, and a keener awareness of one’s limited time on the planet, but these presentations, in their faux boosterism, blend together. All show. They’re slick. Slick as in B*O*R*I*N*G. Enduring them means you won’t recover the hours spent listening to them. At slide 42 one wants to stand up and scream, “What do you want?” A common tactic is to deluge the recipient with a stupefying torrent of information, hoping it will render the prey senseless, or at least more pliable, when negotiations begin. 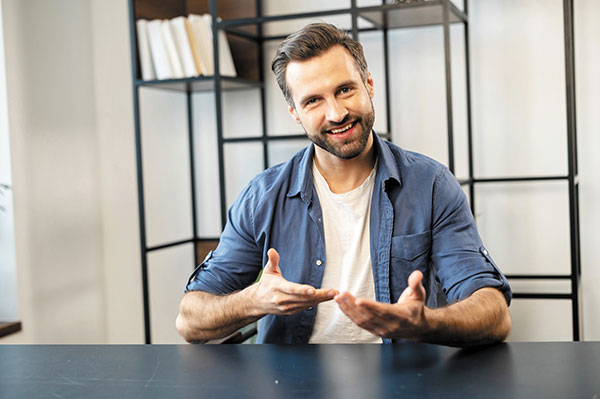 Beware the tech "visionary" who inflates your "partnership.”

That’s why he considers us “The Help.”

Often this is a moment of revelation in the test engineering and failure analysis world. The client’s pattern of answers to specifics betrays technical ignorance. As in, “We were hoping you could devise a test plan for us,” or, “We weren’t sure which x-ray system approach was best for our needs. We were hoping you could write down an inspection strategy for us to use for future statements of work.”

You know, the kind good enough to go anywhere to any competitor to obtain a cheaper quote, otherwise known as Free Engineering. Often, like a good trial lawyer, the client knows the answer to his question when he asks it. He’s merely fishing for commitment. How far will he open up? What will a Partnership entail?

But I digress. Slide 42 was the midpoint. The financial pitch was yet to come.

Often we attempt to disarm wary or scheming customers by employing blunt honesty. For many clients it is an invigorating break from their day-to-day to hear us tell them we have no experience with their business and no clue what a good part or system means to us. But we're willing to learn. We are circuit board people who operate a great big CT scanning machine. Inevitably, engineers find it advantageous to bring requests to scan items that are not printed circuit boards. Included among these are additive-manufactured parts, some with exotic materials of varying thicknesses and densities. Some will admit x-rays; some won’t.

That’s where honesty comes in. If it’s an unfamiliar application, manufacturing technique, material, composite or coating, we sometimes admit to the customer its newness (to us). We’re willing to learn, and for that we make a deal. We offer to attempt a few test images to see if we can capture the view the customer wishes to obtain, which is often vague due to lack of a statement of work or technical ignorance both feigned and actual – or both! (See above.) These test images are usually offered free of charge, as long as the customer isn’t a jerk. If we succeed with those images, terrific. We can then discuss a program that is mutually acceptable and work out the cost in collaboration with the project engineers. If we don’t, then, as the saying goes, no harm, no foul. We tried, and it didn’t cost the customer a thing. No risk for them. See you next project.

Historically this approach has worked well. It works really well with engineers from big-name companies that often have labs with our own capabilities and more, but who lack the speed, flexibility and responsiveness we offer. Two-day turnaround often is a compelling alternative to six- or eight-week turnaround using internal corporate resources, especially if you don’t need a glossy report and rely on the images to tell the tale, most especially in line-down situations. The economics of urgency sells itself.

Ease of use notwithstanding, this is a business proposition. The operating assumption remains that if we succeed – however success is agreed to and defined – the customer will pay. Free images are a means to an end, namely a successful working inspection program, the terms of which are defined as we go. That is understood. For most, it would seem obvious and not need an explanation.

Except to the Visionary with the parking problem.

When I tell him he’ll have to pay a sum for our services, he reacts with the facial features of one who has ingested something unpleasant, probably at the orders of his mother, bringing back unsavory childhood memories of folk medicine. Thus infused, he speaks indignantly of looming betrayal of the goodwill our Partnership is built on.

Built on? We only met an hour ago.

ROBERT BOGUSKI is president of Datest Corp. (datest.com); This email address is being protected from spambots. You need JavaScript enabled to view it.. His column runs bimonthly.