The proliferation of satellites and the "orbital economy" have exciting implications for Earth – but not without challenges.

An exciting market is developing 300km above Earth. New Space promises to revolutionize the delivery of internet services and create new opportunities for Earth observation that could help us improve crop yields, anticipate natural disasters, and manage our impact on the environment. There are also opportunities for manufacturing in space, taking advantage of microgravity to produce high-purity optical fibers and materials such as graphene, semiconductors, and superconductors. The in-space, or orbital, economy is already being debated.

This commercial development of New Space, which defines low Earth orbits (LEO) in the 300km-2000km altitude range, has become possible through the ongoing democratization of rocket and satellite technology over the last few years. Until recently, space missions were mostly the preserve of government-backed organizations. Today, however, the responsibility for launching satellites, as well as taking people and supplies to the International Space Station, has become substantially outsourced to private enterprises.

The size of satellites themselves is also becoming smaller, while supporting increasingly sophisticated capabilities, allowing greater value at lower cost. Small satellites, or SmallSats, are generally considered to be less than 180kg and, in fact, have been in use since NASA’s pre-Voyager missions of the early 1970s. The category is now more subdivided than ever and contains nanosatellites less than 10kg, picosatellites in the 0.1-1.0kg range, and femtosatellites of 10-100gm, although these limits are not rigidly defined. And, of course, there are CubeSats: the scalable proposal based on a standard 10 x 10 x 10cm basic building block. These are accessible to academic groups, including schools, as well as small commercial organizations.

Although many proposals for in-space manufacturing are currently theoretical and untried in practice, several large constellations have already been established to deliver internet access globally. These are expanding continually as new satellites are launched and connected.

Ultimately, services like OneWeb will comprise several hundred individual satellites, and we can expect even larger constellations containing tens of thousands of satellites in the future as services like SpaceX’s Starlink are scaled up.

I’m excited about the opportunity here to deliver broadband services in locations not currently served by terrestrial connections. There is the potential to eradicate the digital divide, delivering high-quality services that offer speed and latency equivalent to conventional wired and 4G cellular connections.

But multiple challenges come with these opportunities: some technical and scientific, some political and ideological. Perhaps the most obvious technical challenges are associated with producing satellites in large quantities. Traditionally, this has been an extremely low-volume activity. Now, manufacturing must adjust to build significantly larger numbers of units – quickly and at low cost. On the other hand, performance, quality and reliability must remain as high as always. This will have an influence on the processes used for production and testing, as well as components and materials.

We can anticipate new generations of radiation-hardened components that will alleviate screening challenges and provide familiar logic, communication, and power ICs at lower cost per part. The makeup of printed circuit boards will also be affected. Polyimide substrate materials have historically dominated aerospace applications because of their ability to withstand thermal cycling. Electronic modules on board satellites experience high temperatures when exposed to direct sunlight, unattenuated by the earth’s atmosphere, and extreme cold at all other times.

As commercial pressures take over setting the pace of development in satellite electronics, demands will grow to explore the potential for other materials and new formulas that offer different combinations of thermal properties, manufacturability, and performance at frequencies from about the 10GHz range to W-band frequencies as high as 110GHz. We are also seeing more flexibility in the design techniques approved for use in space applications, such as the use of microvias among efforts to minimize circuit board size and weight. Understanding the reliability issues associated with substrates, materials and processes is critical. There is no opportunity to repair failed equipment in space, so, once launched, the satellites and their payloads need to perform properly for the full design lifetime. 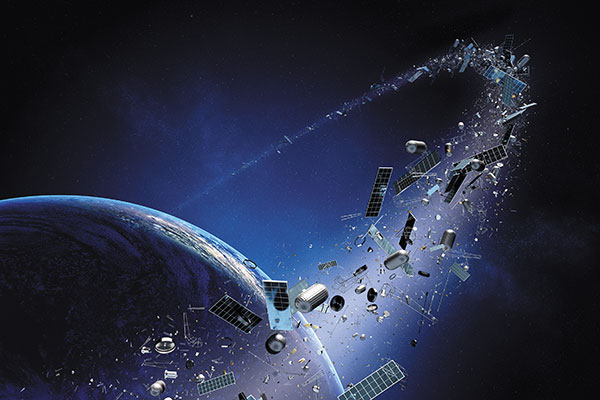 A plethora of private satellites are democratizing internet services, but space debris is a problem.

I have no doubt materials suppliers can rise to the challenges, and new materials well suited to the needs of commercial space services will emerge. Not everyone is excited at the prospects for New Space and the orbital economy, however. Some feel problems on Earth – such as hunger, war, and poor healthcare and sanitation, to name a few – must be addressed more adequately before governments should subsidize economic development in space. Private enterprise will most likely do the lion’s share of development.

Astronomers are also less than thrilled at the prospect of having satellite mega-constellations impair their studies. And then there is space junk. Even minute pieces of debris present a significant hazard to active satellites. Concerns about this issue began to arise after a few years of space exploration, resulting in the gloomy Kessler Syndrome that suggests an ongoing chain reaction of collisions could render Earth orbits practically unusable. To combat the problem, the United Nations has suggested satellite operators remove their satellites after 25 years in service. The space industry needs to work out a satisfactory way to accomplish this, which could be difficult given the many thousands of satellites expected to be launched over the next few years.

We can achieve great things by developing New Space, but, as we have discovered here on Earth, we need to be careful about the impact of our actions and apply equal ingenuity to minimize the damage, while making the most of the opportunities.

Alun Morgan is technology ambassador at Ventec International Group (ventec-group.com); This email address is being protected from spambots. You need JavaScript enabled to view it..