A multi-part study found plenty of whiskers, but not where they were expected.

The elusive tin whisker is only 1/100th the width of a human hair, but this tiny, single filament protrusion can wreak havoc with all sorts of electronics, and has even been cited as the cause of some sudden acceleration failures in cars. Tin whiskering is not a new phenomenon, however. It has been documented as far back as the 1940s, so why the heightened concern now? Lead was a great mitigator of whiskers and its removal from electronic solder opened the door for increased whisker proliferation, perhaps with sometimes deadly consequences.

Despite years of study, a single root-cause mechanism on whisker formation has yet to be established. Common wisdom suggests that they are a form of stress-relief, compensating for the compressive stresses induced by electroplating, mechanical torqueing or bending, intermetallic compound growth or thermal expansion mismatches. As more life- and mission-critical electronics move to Pb-free solders, the need to understand and prevent their formation is heightened.

Experimental overview. The test method used copper wire hot-dipped in molten alloy, cooled, and bent into a U-shape with a forming die on an arbor press (Figure 1). Nine different alloys were tested; coating thicknesses ranged from 300 to 500µin (8-13µm). Samples were then divided into subgroups for three different tests (Table 1). 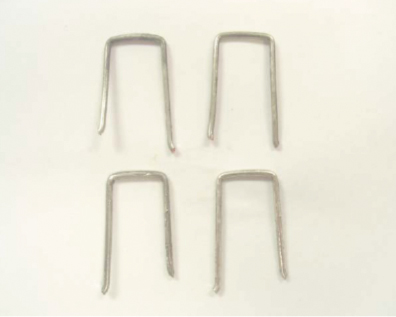 Revelations. Whiskers were observed in the areas of applied tension – the outside of the bend. If mechanical compression were a sole factor in whisker formation, then they would not have grown in areas held in tension. Whiskers did not grow exclusively in areas of applied tension; they were also noted on other locations of the test specimens, including the compressed areas on the inside of the bends. However, their appearance on the outsides of the bends was not anticipated. Figure 2 shows the area where whiskers were expected to grow; Figure 3 shows a close-up of a whisker on the tension side of the bend. 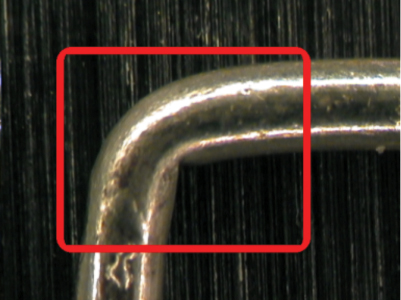 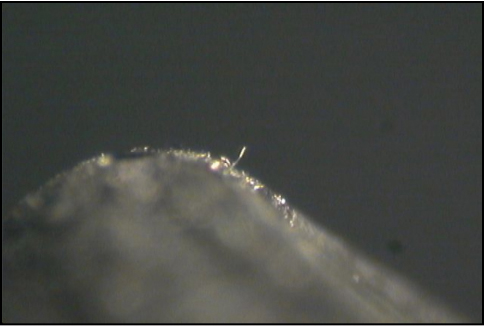 Figure 3. Whisker growth on outside, or tension side of bend.

Whisker growth is not limited to plated surfaces. All the test specimens were hot dipped; none were electroplated. Yet whiskers were observed on all the specimens tested, indicating that electroplating is not a sole factor in whisker formation either.

Thermal cycling did not induce whisker growth. No whiskers were found after 500 and 1000 thermal cycles. This was surprising, as whiskers were expected to result from the repeated thermal expansion and contraction of both the Sn-based coatings and the underlying copper.

The tests’ findings did not trend consistently with some of the conventional wisdom on whisker formation factors. The unexpected results don’t invalidate our current understanding of the phenomenon, but rather illustrate the enigma it presents and the reason why no single root-cause has been established despite decades of exhaustive studies.

While our metallurgists continue to review and interpret the thought-provoking results of Phase 1 of the tests, the three developmental alloys that demonstrated the least whiskering and the SAC 305 control progressed to Phase 2 of the test plan. The longest whiskers observed on each of these alloys are shown in Figure 4. 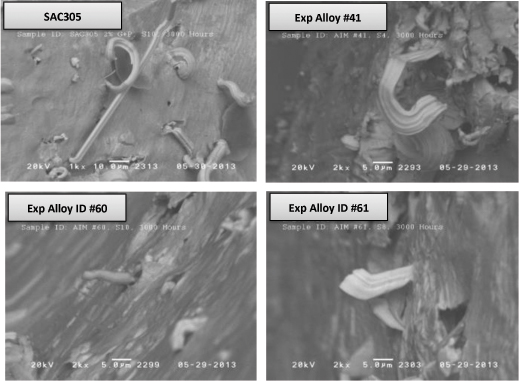 Next phases. Phase 2 of the experiment characterized the alloys’ suitability for electronic soldering: mechanical, thermal and wetting properties. Phase 3 combined the information from Phase 1 and 2 with other studies to form a short list of Pb-free, minimally whiskering alloys and studied their intermetallic compound (IMC) growth kinetics. The results of these phases will be reviewed in upcoming issues.

Karl Seelig is vice president of technology at AIM Solder; This email address is being protected from spambots. You need JavaScript enabled to view it.. Tim O’Neill is regional manager at AIM.